In the 1950s, a few abandoned field areas were planted with different species of pines including white, red and loblolly pine. In addition, many acres of native Virginia pine, shortleaf pine and pitch pine are present. Modern forestry practices are evident throughout the forest. Large blocks of Virginia pine are being harvested for conversion to hardwood species, which are more beneficial and have greater commercial value.

The forest is open year-round to hunting, hiking and general sight-seeing. Camping, swimming and fishing are available in nearby Forked Run State Park. Portions of the forest are within sight of the Ohio River near the Belleville Locks and Dam at Reedsville. Truck farming is common on the rich floodplain soil near the river. Crops of cabbage, tomatoes, sweet corn and cucumbers are produced. 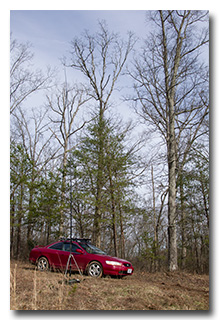 The pair arrived at Shade River State Forest at about 1940 UTC and drove to the cul-de-sac at the end of the muddy, rutted, and challenging, Natural Resources Road #5 and spent a few minutes surveying the area around the cul-de-sac. In order to avoid strapping the tripod to the now-muddy wheel and tire, Eric chose to back the car up into a pull-off where the ground would accept stakes. Eric and Miles erected the 33' MFJ-1910 fiberglass mast, and deployed 28½' end-fed wire and three counterpoise wires. Eric hung his KX3 on the car's glovebox door and was on the air by 1955 UTC.

Eric began operations on 40m, calling CQ on 7.032 MHz. His first QSO was with KE4CQ at 1959 UTC. Eric made an additional six QSOs on 7.032 MHz before switching to 20m, where three QSOs were made. Eric then switched to 30m but no QSOs were made there. In all, Eric made ten contacts in just over thirty minutes. 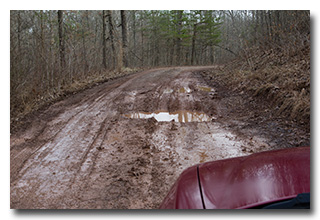 Eric also submitted his log to the World Wide Flora and Fauna in Amateur Radio (WWFF; link) program although his ten QSOs were not sufficient to achieve a valid activation within the program which requires 44 QSOs be made. However, the WWFF program allows these 44 QSOs be made over any number of visits so a valid activation within WWFF is still possible if subsequent visits to the park are made.