Scioto Trail State Forest maintains 26 miles of bridle trails for day use by horseback riders and hikers. Mountain bikes are also permitted on these trails.

Six miles of paved roads and 18 miles of gravel roads provide good access to all areas of the forest. Scenic vistas and overlooks on several of the roads attract many visitors year-round, but especially during the fall when the leaves are turning color.

Populations of deer, wild turkey, squirrel and grouse encourage many hunters to pursue their favorite sport at Scioto Trail. Mushroom hunting in the spring is attracting more and more visitors to the forest each year. 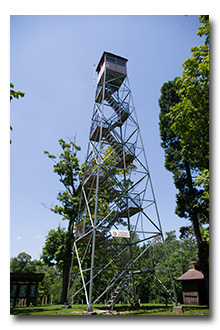 Eric and Miles arrived at the firetower in Scioto Trail State Forest at about 1730 UTC. After a quick survey of the area surrounding the base of the firetower, Eric and Miles set up the station in the shade of a stone-and-beam picnic shelter and some large trees, quickly deploying the 28½' end-fed vertical supported on an MFJ-1910 33' fiberglass mast and setting up the KX3 on Eric's folding camping chair. Eric was on the air by 1744 UTC.

Eric began operations on 80m for a QSO at 1745 UTC with his friend and fellow SEORAT-member, K8RAT. Not expecting much additional activity on 80m at that time of day, Eric switched to 40m to continue operations. 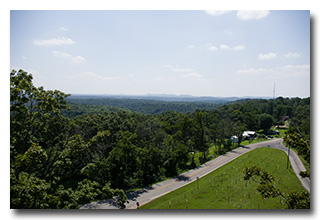 Switching to 20m, Eric's first QSO there was a park-to-park QSO at 1809 UTC with NA9M, who was activating White River Marsh State Wildlife Area, K-4341. As at Great Seal State Park and at Hopewell Culture earlier in the day, QSOs on 20m came briskly. It took Eric just twenty-five minutes to make eleven QSOs on 20m, with his eleventh QSO on 20m coming at 1836 UTC with W0ITT.

While Eric was busy making a QSOs, a couple who had arrived earlier and had spent some time alone in the picnic area, asked Miles to take their picture—they had just gotten engaged there at the park.

After tear-down, Eric and Miles climbed the firetower to enjoy the vista and then made the very, very short drive to the fourth of the five parks, Scioto Trail State Park, K-1990.

All Eric's QSOs were CW and were made at the 5-watt level. Miles didn't operate but helped with set-up and tear-down, photography, spotting, and navigation.