The Division of Forestry manages the Richland Furnace State Forest under a multiple-use concept. This means the forest is being managed for wildlife habitat improvement, recreation, watershed protection, forest products, and aesthetics. Richland Furnace State Forest is open to public hunting and contains one of the four All-Purpose Vehicle (APV) areas operated by the Division of Forestry. 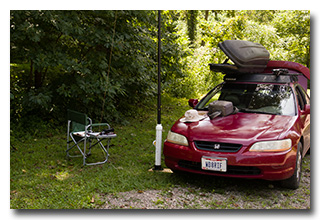 On Sunday, August 11, 2019, one member of the Southeast Ohio Radio Adventure Team performed a successful activation of Richland Furnace State Forest in Ohio as part of the Parks on the Air (POTA; link) program. Eric McFadden, WD8RIF, was accompanied to the park by his wife Vickie, KC8MAJ, and their two dogs, Theo and Mindy.

Eric hadn't planned on performing a POTA activation on the Sunday the 11th because he had performed two activations the day before, but when Vickie suggested they find a POTA unit to activate where the dogs could run around and play, Eric readily agreed and chose Richland Furnace State Forest as the unit to visit.

Eric, Vickie, and the dogs arrived at the Richland State Forest APV trailhead parking area at about 1800 UTC. Eric was slightly perturbed to see that power lines ran right over the picnic shelter but he was pleased to find some shade trees located well away from the power lines and he chose to set up his station in the shade of these trees, safely away from the power lines and well out of the traffic pattern of pickup trucks and APVs. Eric deployed his 28½' wire vertical on his 31' Jackite telescoping fiberglass mast supported on his drive-on mount and set up his KX3 on his folding camp-chair adjacent to the base of the mast. Eric was on the air at 1824 UTC.

Wanting to give his good friend and fellow SEORAT-member K8RAT, Mike, a QSO, and expecting to find no cell-signal at the site—and, indeed, there was none—Eric had prearranged for Mike to listen on a chosen 80m frequency at 1830 UTC and, if necessary, again at 1900 UTC. In addition, Eric had asked Mike to place an initial spot for Eric on the POTA Spots website upon seeing Eric spotted on the Reverse Beacon Network. Mike was listening early on 80m and a QSO was completed at 1827 UTC. Eric gave Mike an RST of 599 and received an RST of 559 in exchange.

Switching to 40m, Eric was startled at the extremely high noise level he found there. Initially, Eric suspected the nearby power lines or some other local source but eventually decided the noise was probably ionospheric, caused by a coronal flow that was underway at the time. Eric was able to cope by narrowing his receiver bandwidth and by utilizing his KX3's Noise Reduction (NR) feature set at "7". Eric's first QSO on 40m was with N2ESE at 1837 UTC. Despite the miserable band conditions, QSOs came steadily on 40m with Eric's eleventh QSO there coming at 1854 UTC with W8NWG.

Switching to 20m at 1856 UTC, Eric found that band to be even noisier than 40m had been. The KX3's S-meter registered the noise floor at a steady S5 and Eric set the KX3's Noise Reduction to "5". Eric managed only one QSO on 20m—although perhaps he might have made more had the noise level been less painful in the headphones. Eric worked N6KZ at 1903 UTC.

In all, Eric made fourteen QSOs on four bands, which doesn't seem bad considering the miserable conditions.

Vickie didn't operate but did perform all the RATpedition navigation and managed the dogs during the operation.