Land acquisition for Pike State Forest began in 1924, with the objective of returning abused hill farms and fire-damaged timber lands to productive forests. Most of the reforestation work was completed in the 1930s by the Civilian Conservation Corps and the Division of Forestry. Pike State Forest now covers 12,084 acres in western Pike County and eastern Highland County. State ownership is broken up into 13 separate, irregular tracts, which make it difficult to manage for continuous recreational facilities, as well as the management and patrol of the forest resource.

The forest offers a wide range of outdoor recreational opportunities. Located off of State Route 124 is the Pike State Forest APV area. The facility has 10 miles of trail open to motorcycles and off road all-terrain vehicles. The trails wind through the hollows and ridge tops, offering the visitor a challenging ride as well as some beautiful scenery and breathtaking views. Parking, latrines, and a novice area are all provided on the site. The APV area closes the day after deer gun season ends through March 31.

For the equestrian there are 33 miles of bridle trails.

Hiking is available on the Buckeye Trail which runs through the forest. Hiking is also permitted on the bridle trails.

For those who want to stay on the beaten path, there are numerous county and township roads that pass through the forest.

Pike State Forest is open to public hunting and fishing in season. Fishing is available at several ponds located in the forest. Anderson Lake off of Dry Bone Road is a popular spot that offers quiet seclusion among the hills and trees. 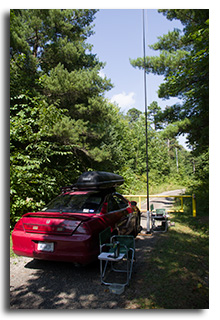 On Sunday, August 18, 2019, one member of the Southeast Ohio Radio Adventure Team performed a successful activation of Pike State Forest in Ohio as part of the Parks on the Air (POTA; link) program while simultaneously participating in the New Jersey QRP Club's "Skeeter Hunt" QRP field event. Eric McFadden, WD8RIF, was accompanied to Pike State Forest by his wife Vickie, KC8MAJ, and their two dogs, Theo and Mindy.

After quite a bit of exploring when Eric's initial choice for operating location turned out to be unsuitable, and after a bit of navigation-confusion, Eric, Vickie, and the dogs found a closed-gate road off of Greenbriar Road (T-237), high on a ridgetop in Pike State Forest, at about 1915 UTC. Parking the car at the closed gate, Eric deployed his 28½' wire vertical on a 31' Jackite telescoping fiberglass mast supported by a drive-on base and set up his KX3 on a folding camp-chair adjacent to the mast, under nice shade trees. In order to earn a 100-point bonus in Skeeter Hunt, Eric displayed the Skeeter Hunt banner on the car's windshield even though he expected the location was remote enough no one but Vickie and himself would see it. Eric was on the air at 1928 UTC.

In order to give his good friend and fellow SEORAT-member K8RAT, Mike, a QSO, Eric started operations on 80m and a QSO was made with Mike at 1929 UTC.

Switching to 40m, Eric began making alternate calls of "CQ POTA" and "CQ BZZ", the latter being the call for the Skeeter Hunt field event. Eric's first QSO on 40m came at 1933 UTC with AD0YM. QSOs came so quickly on 40m that Eric was unable to keep up with logging and was forced to just hope his chicken-scratch CW-copy on scrap paper was legible enough for later transfer to the proper logsheet. Eric's fifteenth QSO on 40m came in just twenty-two minutes at 1955 UTC with WU4B.

In all, Eric made eighteen QSOs in about thirty-seven minutes on three bands. Seven of the QSOs were complete for Skeeter Hunt, although one was a dupe for Skeeter Hunt but counted for POTA. The remaining eleven QSOs were with POTA Hunters, many of the callsigns being familiar to Eric from previous POTA activations.

Vickie didn't operate but did help with the RATpedition navigation and managed the dogs during the operation.