Whether you come to Perry to ride APVs (all purpose vehicles), go horseback riding, hunt or just visit, you will have an enjoyable state forest experience. Much of Perry State Forest was strip mined for coal prior to existing reclamation law, resulting in very rugged, sometimes barren terrain. Since the state acquired the area in 1961, some reclamation has been accomplished, including a large area along County Road 48. Several reforestation and test tree plantings have been established on the forest.

The Perry APV area is the most popular public riding area in Ohio. Miles of challenging trails are open. Picnic tables and latrines are provided at the parking area. The APV area closes the day after deer gun season ends through March 31.

The diversity of forest cover encourages a variety of wildlife species and hunting opportunities. 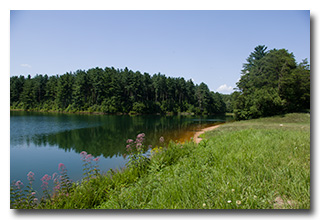 On Sunday, August 4, 2019, one member of the Southeast Ohio Radio Adventure Team performed a successful activation of Perry State Forest in Ohio as part of the Parks on the Air (POTA; link) program. Eric McFadden, WD8RIF, was accompanied to the state forest by his wife Vickie, KC8MAJ, and their two dogs, Theo and Mindy.

Eric hadn't planned on performing a POTA activation on Sunday the 4th since he had performed two activations the day before, but when Vickie suggested they find a POTA unit to activate where the dogs could run around and play, Eric readily agreed and chose Perry State Forest as the unit to visit.

Eric, Vickie, and the dogs arrived at a small pond called Lake Miles in Perry State Forest at about 1915 UTC and, after a bit of exploring, decided Lake Miles wouldn't provide sufficient shade or an area for the dogs to play. Continuing their drive into the state forest, the intrepid group found Lake Essington at about 1940 UTC. Lake Essington is prettier than Lake Miles, has far more open area for the dogs to explore, and a pair of nice shade trees under which Eric could set up and operate. Eric had to wait a few minutes for a pair of picnickers to vacate the area under the trees before he could set up. Once parked under the trees, Eric discovered that the whole area under the trees was full of poison ivy but, nevertheless, deployed his 28½' wire vertical on his 31' Jackite fiberglass telescoping pole supported by his relatively new drive-on mast-mount. Because of the poison ivy, Eric initially tried to deploy only two of his 17' counterpoise wires under the vertical but when his KX3's internal ATU failed to find a good match on 80m, he deployed the third radial. Eric had announced on the POTA website that he would be on the air at 1900. In fact, Eric managed to get on the air at 2000 UTC, a full hour late.

Hoping to give his good friend and fellow SEORAT-member K8RAT, Mike, a QSO, Eric started operations on 80m. Eric could hear Mike but Mike couldn't hear a peep out of Eric, so no QSO was made. 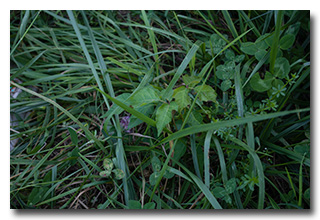 Switching to 40m, Eric's first QSO there was with WA3TVH at 2009 UTC. QSOs came steadily with Eric's thirteenth QSO coming at 2035 UTC with W4LPH. A pleasant surprise during this time was being able to make a park-to-park QSO with N4CD, who was performing an activation of Governor Daniel Dunklin's Grave State Historic Site (K-3351), in Missouri.

Switching to 20m, Eric found that band to be far less productive than 40m had been, and he made only one QSO there, a QSO with WD0ACB at 2045 UTC.

Eric had earlier arranged with Mike for him to watch the Reverse Beacon Network and, upon seeing Eric spotted by RBN on 40m, post a spot on the POTA Spots page. This Mike did and, thereafter, the POTA Spots site properly skimmed RBN to make updated spots for Eric, including a spot to reflect his change to 20m.

Just as Eric was beginning to disconnect his station, he received a cell-phone call from his father Tom, W8EOG, who had been following Eric's spots on the POTA Spots website and had hoped to have a QSO. Eric reconnected his station and tuned up on 80m but, unfortunately, W8EOG couldn't hear Eric so no QSO was made.

Eric was careful during tear-down to try to clean his antenna wires, particularly the counterpoise wires, of poison ivy oil by wiping the wires with a succession of wet-wipes as he coiled up the wires.

Essington Lake in Perry State Forest was quite lovely and it weren't for the masses of poison ivy, the gnats, and the dust raised by the occasional passing car, this would have been a lovely picnic site. The dogs did enjoy exploring the area but didn't enjoy being wiped down with doggie-wet-wipes in an attempt to remove poison ivy oil from their coats—and they certainly didn't enjoy the thorough baths they received upon arriving home. Eric and Vickie also bathed upon arriving home, laundered all the items of clothing they had been wearing, and Eric even washed his shoes. It remains to be seen if both managed to escape getting blisters from the poison ivy, either from touching poison ivy directly or from oil transferred from the dogs' fur.

All Eric's QSOs were CW and were made at the 5-watt level. Vickie didn't operate but did perform all the RATpedition navigation and managed the dogs during the operation.