Ninety-nine acres of forest land have been set aside for rock climbing and rappelling. The area is located on Big Pine Road, one mile east of Conkle's Hollow. A parking area is within easy walking distance of the rock and cliff face. Be sure to use quality equipment and climb with experienced people.

One of the special attractions of Hocking State Forest is the natural vegetation. Plant species commonly found farther north mix with typically southern species to provide an unusual variety of native plant life and associated wildlife. 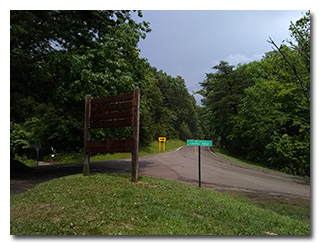 One member of the Southeast Ohio Radio Adventure Team succeeded in performing a valid activation of Hocking State Forest, K-5442, in Ohio as part of the the Parks on the Air (POTA; link) program. Eric McFadden, WD8RIF, visited Hocking State Forest at the Ash Cave Fire Tower parking area on what would become a stormy Sunday afternoon in late May.

Arriving at the Ash Cave Firetower parking lot on Chapel Ridge Road about 1745 UTC after a nice drive through sunny weather, Eric was surprised to hear localized thunder when he got out of his car. Because of the threat of lightning, Eric chose to deploy his shortest antenna, his N2CX-inspired 20/30/40m wire vertical suspended on a 20' fiberglass pole and he chose to set up his KX3 inside the car. Eric was on the air by 1810 UTC.

Eric began calling "CQ POTA" on 40m but within four minutes, before any stations were worked, the skies opened and rain began to fall. Pea sized hail fell at 1818 UTC, and at 1821 this had turned to 1/4" hail. Still with no stations in the log, at 1824 UTC Eric decided to disconnect his KX3 from the antenna, and he threw the end of the coaxial cable under the car to protect the BNC from the rain. The storm abated a bit and at 1831 UTC Eric re-connected the antenna to the KX3 and began calling CQ again. 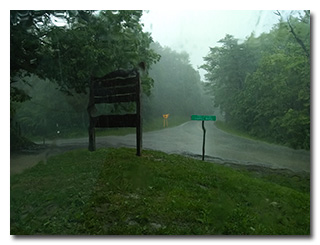 At 1840 UTC, the sun returned, although thunder was still audible. At 1849, the rain returned.

At 1852 UTC, Eric tuned around on 40m and worked a participant in the WPX CW contest. Back to calling CQ, Eric logged VE3LDT at 1856 UTC.

Changing to 30m, worked K3KRC at 1910 UTC and AA5UZ at 1919 UTC. It was about the time that Eric was working K3KRC that he realized he had been sending the wrong park designator during his QSOs. Fortunately, Eric had been spotted on the POTA Spots website properly the whole time. (Back at home that evening, Eric emailed all but one of his contacts to give the proper park designator.)

Finally, resorting to tuning around for WPX participants, Eric logged his 7th through 10th QSOs on 20m.

Having taken well over an hour to make his required ten QSOs, Eric called it quits at Hocking State Forest so he could tear down and drive to his next park.