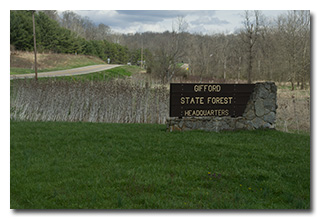 On Friday, April 8, 2022, one member of the Southeast Ohio Radio Adventure Team performed a successful activation of Gifford State Forest in Ohio as part of the Parks on the Air (POTA; link) program.

Eric arrived at Gifford State Forest at about 1750 UTC. Under gray skies and a light rain, while Theo explored, Eric deployed his 28½' wire vertical on a Jackite 31' telescoping fiberglass mast and drive-on mount and, because of the precipitation, he set up his KX3 inside the car. Eric was on the air at 1803 UTC. 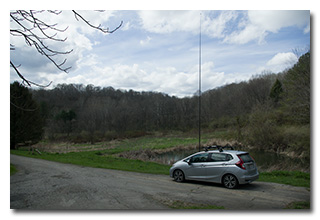 As at all of his previous visits to Gifford State Forest, Eric had absolutely no cell-signal during this visit. Having anticipated this, he had announced his planned activation on the POTA website in the hope that POTA Spots would automatically spot him when he appeared on Reverse Beacon Network (RBN, link) and had also asked his friends K8RAT and K4SWL to watch the Reverse Beacon Network (RBN) for him.

Eric began operations on 40m by finding a frequency to run and calling "CQ POTA". It quickly became apparent to Eric that he wasn't being spotted to POTA Spots, either automatically based on his announcement and the RBN or by his friend K8RAT and K4SWL, because his calls were going unanswered. (Eric later learned from K8RAT that few or no RBN-spots were being picked up by POTA Spots on this day, and that his attempts to spot Eric to POTA Spots had repeatedly failed.) 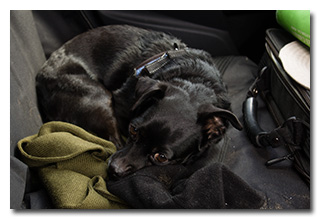 Eric's first QSO finally came at 1815 UTC with KC2JED operating mobile in New York; KC2JED isn't a POTA hunter and, because he was operating mobile, probably hadn't been watching POTA Spots. Eric's second QSO came at 1818 UTC with N8RVE in Ohio. N8RVE is a POTA hunter, and he promised to spot Eric to POTA Spots; he must have been successful because at 1823 UTC, Eric's run finally started, with a QSO from WB2FUE in Pennsylvania. Thereafter, QSOs then came quickly, with Eric's thirteenth QSO coming at 1833 UTC with K4CAE in South Carolina. This run included QSOs with stations in New York, Ohio (4), Pennsylvania (3), Michigan (2), Minnesota, Illinois, and South Carolina.

Being interested to see if POTA Spots would follow him to a different frequency, Eric switched to 30m and began calling CQ. It seems POTA Spots did automatically update Eric's spot, or perhaps K8RAT succeeded in updating Eric's spot. Eric's first QSO on 30m came at 1838 UTC with WB4AEG in Georgia. QSOs came steadily, with Eric's eighth QSO on 30m coming at 1851 UTC with VE3DQN in Ontario. This run included a P2P QSO with AF8E who was activating Wayne National Forest (K-4521) in Ohio and QSOs with operators in Georgia, Florida, New Hampshire, Louisiana, Tennessee, Ohio, Rhode Island, and Ontario.

Still being interested to see if POTA Spots would follow him, Eric switched to 20m and began calling "CQ". Eric's first and only QSO on 20m came at 1856 UTC with KI5AL in Texas. Several more minutes of calling "CQ" failed to produce any additional QSOs and Eric decided to call it quits. Conveniently, the gray skies and rain that had been present during set-up had completely disappeared and tear-down took place under blue skies and puffy white clouds. 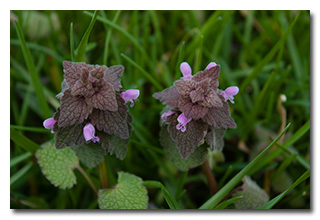 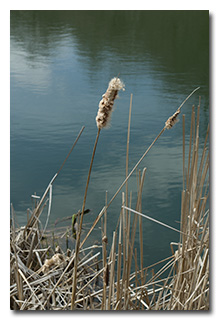 In all, Eric made twenty-two QSOs, including one P2P QSO, in about fifty-three minutes. All of Eric's QSOs were CW and were made with five watts output.