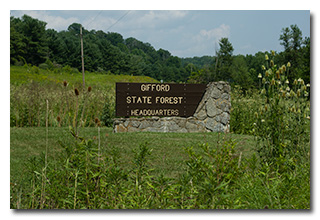 On Sunday, August 8, 2021, one member of the Southeast Ohio Radio Adventure Team performed a successful impromptu activation of Gifford State Forest in Ohio as part of the Parks on the Air (POTA; link) program.

Eric McFadden, WD8RIF, hadn't planned on performing a POTA activation but when his wife, Vickie, suggested they go somewhere for a POTA activation, he jumped at the chance. Since Vickie would go with him, he chose to return to Gifford State Forest and, afterwards, visit Triple Nickel Diner in Chesterhill for an early dinner. Eric and Vickie were accompanied by their two small dogs, Theo and Mindy.

Eric, Vickie, and the dogs arrived at Gifford State Forest on a beautiful but hot day at 1800 UTC. Seeing that nice shade trees were available, Eric chose to deployed his 28½' wire antenna on his 33' MFJ-1910 telescoping fiberglass mast and tripod, and he set up his KX3 on his folding camp-chair placed in the shade. Eric was on the air at 1812 UTC. 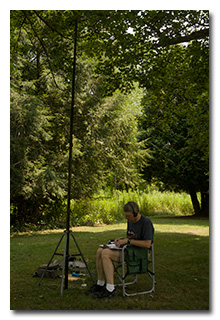 As at his previous visits, Eric had absolutely no cell-signal at his location in Gifford State Forest. Anticipating this to be the case, he had announced his planned activation on the POTA website and had asked his friends K8RAT and K4SWL to watch the Reverse Beacon Network (RBN) and place a spot on the POTA Spots website when he appeared on the RBN.

Eric began operations by calling "CQ POTA" on 40m and his first QSO came after only two minutes of calling "CQ". Eric later learned that POTA Spots automatically spotted him at the correct park based on the RBN and his announcement—neither K8RAT nor K4SWL had to make the first spot for Eric. Given that propagation conditions were poor, QSOs on 40m came more quickly than might have been expected, with Eric making twelve QSOs in sixteen minutes.

When his calls of "CQ POTA" stopped producing QSOs on 40m, Eric switched to 30m as an experiment—would POTA Spots properly spot him on the new frequency? Indeed, it did, and Eric had to call "CQ POTA" for only two minutes before making his first QSO on 30m. QSOs came reasonably quickly, with Eric making three QSOs on 30m in six minutes.

When 30m dried up, Eric switched to 20m as a continuation of the experiment and, as on the other bands, Eric had to call "CQ POTA" for less than three minutes before his first QSO came on the new band. Eric made two QSOs on 20m in about five minutes.

Because the Triple Nickel Diner closes at 4pm on Sundays, Eric finished his operation with seventeen QSOs, all of which were were CW and were made at the 5-watt level.

(And, at the Triple Nickel Diner in Chesterhill, Eric and Vickie ate in the lovely outdoor dining area—which features an apple tree, a pear tree, a peach tree, and a cherry tree—so the dogs wouldn't be left in a hot car.)