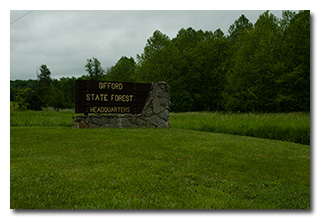 On Saturday, May 29, 2021, one member of the Southeast Ohio Radio Adventure Team performed a successful activation of Gifford State Forest in Ohio as part of the Parks on the Air (POTA; link) program.

Eric McFadden, WD8RIF, returned to Gifford State Forest on a cool day that promised rain. Eric arrived at the Indian Stone Trail / Vista Trail trailhead parking area at 1615 UTC. Choosing to operate in his car because of the temperature and threat of rain, Eric deployed his 28½' wire antenna on his 31' Jackite telescoping fiberglass mast and drive-on base and mounted his KX3 on the car's dashmount. Eric was on the air at 1633 UTC.

Eric was not surprised to find he had absolutely no cell-signal at his operating location, since this had been that case at both of his previous visits. However, against such an eventuality, he had announced his planned activation on the POTA website and had asked his friends K8RAT and K4SWL to watch the Reverse Beacon Network (RBN) and place a spot on the POTA Spots website when he appeared on the RBN. 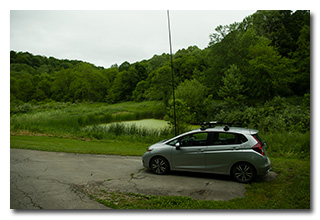 Eric began operations on 40m and his first QSO, with K4QZB, came at 1635 UTC. QSOs came quickly, with Eric's twelfth QSO coming at 1649 UTC. This run included a park-to-park (P2P) QSO with K0BWR who was activating Prairie Spirit State Park (K-2350) in Kansas.

Switching to 30m, Eric made three QSOs in eight minutes. This run included a P2P QSO with W6KSR who was activating Joshua Tree National Park (K-0041) in California.

In all, Eric made fifteen QSOs including two P2P QSOs. All of Eric's QSOs were CW and were made at the 5-watt level.