Gifford State Forest is the smallest of Ohio's state forests, at 320 acres, but offers some very pleasant hunting and hiking opportunities in the scenic northern edge of Athens County.

This state forest was donated to the state in 1959 by William Gifford Selby for experimentation and research. It was named for his mother Virginia Gifford and her family. Today, Gifford State Forest is managed by the Division of Forestry.

Game animals such as deer, grouse and rabbit, as well as many non-game animals thrive in the area. Hunting these and other game animals is permitted on the forest in season. 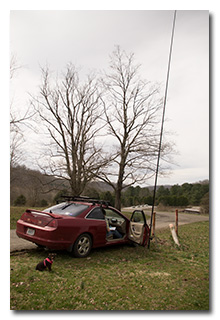 One member of the Southeast Ohio Radio Adventure Team succeeded in performing a valid activation of Gifford State Forest, K-5440, in Ohio as part of the the Parks on the Air (POTA; link) program. Eric McFadden, WD8RIF, visited Gifford State Forest with his wife Victoria and their two dogs, Mindy and Theo, on a warm but blustery early spring day.

Eric arrived at Gifford State Forest at about 1648 UTC and quickly erected his MFJ-1910 33' fiberglass mast and deployed his 28½' wire vertical with three radials while Vickie walked with the dogs Mindy and Theo. Because of the gusty wind, Eric chose to operate from within his car. Eric was on the air by 1604 UTC.

Eric started operations on 40m and got a reply on his second CQ from K9UCX, Ken, in Illinois. QSOs came steadily on 40m and Eric worked his tenth station, WB9OWN, at 1630 UTC. Eric switched to 20m but no one responded to his CQs. Eric switched to 30m but there, too, no one answered his CQs. Returning to 40m, Eric worked K4JAZ at 1649 UTC before switching frequency to try to make a park-to-park QSO with N2CX, Joe. While waiting for Joe, Eric worked WK2Y, who was performing a SOTA activation, at 1705 UTC. Unfortunately, Joe didn't arrive on 40m until after Eric decided to tear down. 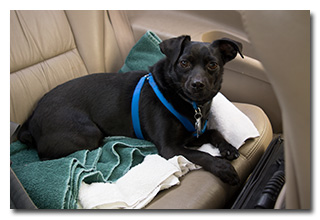