Located in the unglaciated hill country of extreme south central Ohio, Dean, one of Ohio's first state forests, was established in June 1916.

A wide variety of recreational opportunities exist at Dean State Forest. One popular activity is hunting. Deer, wild turkey, grouse, squirrel and rabbits are hunted in season at Dean. Several small ponds are located on the forest, and used by anglers. Mushroom hunting is becoming an increasingly popular activity.

Approximately 20 miles of bridle trails run throughout the forest and offer users a scenic ride through the woods. Hiking is also permitted on the bridle trails. 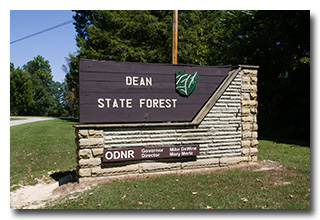 On Saturday, August 10, 2019, one member of the Southeast Ohio Radio Adventure Team performed a successful activation of Dean State Forest in Ohio as part of the Parks on the Air (POTA; link) program. Eric McFadden, WD8RIF, was accompanied to the park by his wife Vickie, KC8MAJ, and their two dogs, Theo and Mindy.

Eric, Vickie, and the dogs arrived at the Dean State Forest picnic and swimming area at about 1900 UTC but failed to find the trailhead parking area Eric had hoped to use for the activation; it appeared that, perhaps, the parking area had been turned into a shooting range, but this couldn't be confirmed with the available maps. Not wanting to keep little Theo-dog anywhere near the sounds of potential shooting, Eric drove back up toward the Forest Headquarters on the ridgetop and, proceeding past the Headquarters, found a large, well-shaded pull-off near a gated road, and decided to set up for his operation there. After performing a field-repair, Eric deployed his 28½' wire vertical on a 31' Jackite telescoping fiberglass mast supported on a drive-on mount and set up his KX3 on a folding camp-chair adjacent to the base of the mast. Eric was on the air at 1934 UTC. 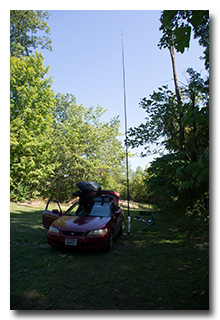 In order to give his good friend and fellow SEORAT-member K8RAT, Mike, a QSO, Eric started operations on 80m and a QSO was made immediately at 1934 UTC.

Switching to 40m, Eric's first QSO there was with WB4WTN at 1934 UTC. QSOs came quickly on 40m with Eric's eleventh QSO there coming at 2002 UTC with W8MSC. (Interestingly, WB4WTN was Eric's first QSO on 40m at Eric's previous activation of the day, at Jackson Lake State Park (link.)

Switching to 20m, Eric found that band to be far less productive than 40m had been, and he made only one QSO there, with KG5AUU at 2008 UTC.

In all, Eric made fifteen QSOs on four bands. All of Eric's QSOs were CW and were made at the 5-watt level. Vickie didn't operate but did perform all the RATpedition navigation and managed the dogs during the operation.