Located in the unglaciated hill country of south central Ohio, Brush Creek State Forest was established in 1928 with the acquisition of 285 acres of land. This and other early land acquisitions were originally part of Shawnee State Forest. As acreage and distances grew, the need to form a separate state forest unit became apparent in order to properly manage these scattered land holdings.

In the early 1950s, a new state forest was formed and drew its name from a major stream in the area known as Scioto Brush Creek. A forest headquarters and service center was established along State Route 73 about one mile west of the village of Rarden in western Scioto County, and presently remains at that site.

The vast majority of these acres is made up of steep hillsides, deep hollows, and narrow ridge tops. Combined with the climate in the region, this land is ideally suited to the growth of deciduous hardwood forests 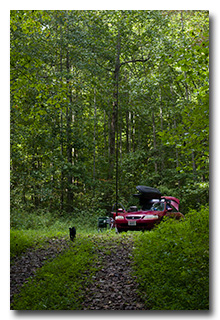 On Labor Day Monday, September 2, 2019, two members of the Southeast Ohio Radio Adventure Team performed a successful activation of Brush Creek State Forest in Ohio as part of the Parks on the Air (POTA; link) program. Eric McFadden, WD8RIF, and Miles McFadden, KD8KNC, were accompanied by little black Theo-dog, and performed the activation in the Coffee Hollow area of Brush Creek State Forest.

The trio arrived at the Coffee Hollow area of Brush Creek State Forest at about 1700 UTC, about forty-five minutes earlier than planned. Since the state forest map (link) didn't show picnic areas or parking lots, Eric had expected it to be challenging to find a place suitable for the operation. However, after driving less than a mile beyond the state forest sign (photo) on the beautifully-maintained Coffee Hollow Road, an ideal location revealed itself: a short but streep driveway up to a flat, cleared area on the west side of the road. Why this cleared area has been maintained remains a mystery—there are no trailheads here and the brush is so thick hunters would have a difficult time penetrating into the forest at this location—but it was perfect for a POTA operation. Eric and Miles wasted no time deploying the 28½'; end-fed wire vertical supported on a 31' Jackite fiberglass telescoping mast which was held upright by a drive-on base and set up the KX3 on a folding camp-chair adjacent to the car. Eric was on the air by 1718 UTC.

Expecting to find no cell signal in the state forest—and there turned out to be no cell signal in this part of the forest—as had approached the forest, Eric had sent his good friend and fellow SEORAT-member K8RAT, Mike, a text asking him to start listening on an agreed-upon 80m frequency at 1700 UTC in the hopes of giving Mike a QSO. However, when Eric finally got on the air, Mike didn't reply to Eric's calls an no QSO with Mike was made at this time.

Switching to 40m, Eric's first QSO there came at 1729 UTC with KD1CT. QSOs on 40m came slowly and Eric's ninth QSO on 40m came at 1747 UTC with NG0E. Subsequent calls of "CQ POTA" by Eric after this point went unanswered.

As the top of the hour approached, Eric returned to 80m in the hopes that K8RAT would be listening there. Eric was rewarded with a QSO with Mike at 1802 UTC.

Eric returned to 40m for a few minutes and then went to 30m for a few more minutes, but no additional QSOs were made.

Eric was happy to have made enough QSOs to validate his activation and was very pleased that 60% of the QSOs he made were with stations whom he had worked many times before at other POTA activations: KD1CT, VE3LDT, N2ESE, N4EX, W9AV, and K8RAT.

Miles did not operate but helped with set-up and tear-down, did much of the RATpedition photography, helped with navigation, and kept his eye on Theo-dog during the operation.