The Blue Rock fire tower was constructed in 1937. It is the last remaining 100-foot fire tower in the state, and the public may climb it. It is an Aermotor tower with a 7' x 7' metal cab. Aermotor is company that has been building windmills since 1888, and the company diversified to include the design and production of most of the nation's forest observation towers starting in 1926. 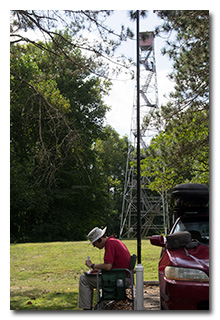 On Saturday, August 24, 2019, two members of the Southeast Ohio Radio Adventure Team performed a successful activation of Blue Rock State Forest in Muskingum County, Ohio as part of the Parks on the Air (POTA; link) program while simultaneously participating as a rover in the Ohio QSO Party. For Eric McFadden, WD8RIF, and Miles McFadden, KD8KNC, Blue Rock State Forest was the first activation of four following a visit to Newark-Heath Airport (VTA) to see and tour B-25J Champaign Gal and C-47D Hairless Joe.

After a later-than-planned departure from Newark-Heath Airport, Eric and Miles arrived at Blue Rock State Forest's fire tower at about 1915 UTC. In the interest of expediency, Eric chose to operate in a shady spot in the parking lot, deploying his 28½' wire vertical on his 31' Jackite fiberglass telescoping mast which was held upright by a drive-on base, and with his KX3 set up on a folding camp-chair adjacent to the car. Eric was on the air by 1936 UTC.

In order to give his good friend and fellow SEORAT-member K8RAT, Mike, a QSO, Eric started operations on 80m and while Eric could hear Mike, Mike could not hear Eric and no QSO with Mike was made. Instead, Eric quickly made six QSOs on 80m with participants of the Ohio QSO who were happy to put Muskingum County in their logs. Eric's first QSO came at 1942 UTC with W4G who was operating in Lake County, Ohio. Eric's sixth QSO on 80m came at 1948 UTC with WB8WKQ in Michigan.

Switching to 20m, Eric found the noise to be even worse than it had been on 40m and no QSOs were made on that band.

Eric didn't recognize any of the callsigns of the stations he worked as being those of POTA Hunters. In all, Eric made ten QSOs in about twenty-four minutes on two bands despite significant noise on one of those bands.

Miles didn't operate but helped with set-up and tear-down, performed much of the RATpedition photography, and helped with navigation.

Miles and Eric climbed the fire tower following the operation. As indicated on the state forest's website (link), the view was breathtaking. 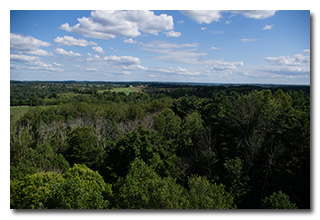 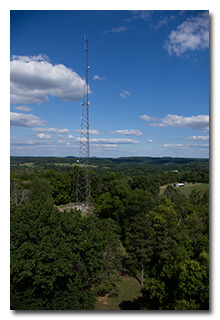