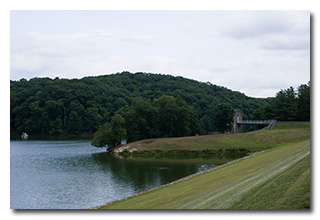 On Sunday, August 16, 2020, one member of the Southeast Ohio Radio Adventure Team performed a successful two-fer activation of Wayne National Forest and North Country National Scenic Trail at Tom Jenkins Dam in Ohio as part of the Parks on the Air (POTA; link) program while participating in the New Jersey QRP Club's annual Skeeter Hunt QRP field contest. Eric was accompanied to by his wife Vickie, his daughter Kate, and their three dogs, Bo, Theo, and Mindy.

Eric, Vickie, Kate, and the dogs arrived at Tom Jenkins dam at about 1745 UTC, about an hour after Eric had planned to arrive, and forty-five minutes into the four-hour-long Skeeter Hunt contest. Eric was pleased to find that the parking area at Tom Jenkins Dam was far from crowded and he chose to park his car and set up his station at the south-east corner of the parking lot, well away from other people. Eric deployed his 28½' wire vertical on his Jackite 31' telescoping fiberglass mast which he supported on his drive-on mount. Because the weather was nice, Eric chose to operate outside the car, and he set up his KX3 on his folding camp-chair which he placed adjacent to his mast. Eric was on the air at 1801 UTC. 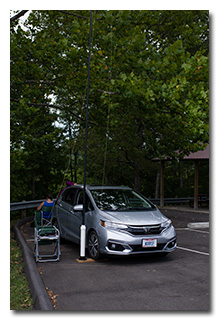 Eric began operations on 80m and his only QSO there came at 1803 UTC with his good friend K8RAT. After this QSO, because he didn't expect Skeeter Hunt activity on 80m, Eric immediately switched to 40m.

Eric's first QSO on 40m came at 1806 UTC with WA1GXC in Rhode Island, as a result of Eric's very first call of "CQ QRP". Thereafter, QSOs came so quickly on 40m that Eric was forced to give up trying to transcribe his QSOs from his CW-copy paper to his logsheets. Eric's thirty-eighth and final QSO on 40m was a POTA park-to-park (P2P) QSO which came at 1925 UTC with K4SWL, who was performing an activation of Roan Mountain State Park (K-2972) in Tennessee. Twenty-six of the thirty-eight 40m QSOs were with operators participating in Skeeter Hunt. At some point during his run, Eric must have been spotted on the POTA website because he worked several operators he recognized as being POTA hunters.

Eric switched to 20m about 1929 UTC but Eric didn't stay long there and no QSOs were made on that band.

Switching to 30m at 1935 UTC solely for the benefit of POTA Hunters—because contesting is not allowed on 30m—Eric began calling "CQ POTA" and his first QSO on 30m came at 1938 UTC with N4DPM in Florida. QSOs came quickly, with Eric's tenth QSO on 30m coming at 1948 UTC with WA9LKF in Illinois. Eric chose to tear down shortly after his QSO with WA9LKF, which was a good decision because rain began falling shortly after he started the process of tear-down.

In all, Eric made forty-nine QSOs, which included thirty-nine Skeeter Hunt-eligible QSOs and one POTA P2P QSOs. All of Eric's QSOs were CW and were made at the 5-watt level.