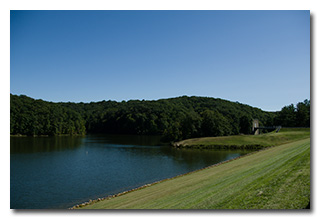 On Saturday, September 19, 2020, one member of the Southeast Ohio Radio Adventure Team performed a successful two-fer activation of Wayne National Forest and North Country National Scenic Trail at Tom Jenkins Dam in Ohio as part of the Parks on the Air (POTA; link) program while participating in the New England QRP Club's annual QRP Afield QRP field contest. Eric was accompanied to by his wife Vickie, his daughter Kate, and their three dogs, Bo, Theo, and Mindy.

Eric, Vickie, Kate, and the dogs arrived at Tom Jenkins dam at about 1745 UTC. Although there was a party under way in the picnic shelter, the parking lot was far from full and Eric was able to park his car along the edge of the lot, well placed to deploy his antenna on his drive-on mount. Eric deployed his 28½' wire vertical on his Jackite 31' telescoping fiberglass mast which he supported on the drive-on mount. Because the weather was nice, Eric chose to operate outside the car, and he set up his KX3 on his folding camp-chair which he placed adjacent to his mast. Eric was on the air at 1756 UTC. 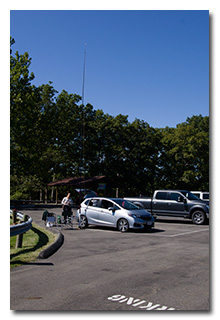 Eric's plans for this operation were to concentrate on making QRP Afield QSOs, although he did self-spot himself on the POTA Spots website so Hunters could find him.

Eric began operations on 80m and made three QSOs on that band: N3XLS in Pennsylvania and K8RAT in Ohio at 1804 UTC and KC5F in North Carolina.

Switching to 40m, Eric's first QSO there was a park-to-park (P2P) QSO at 1812 UTC with VE3BXG who was performing an activation of Lac-Beauchamp Park Regional Nature Reserve, VE-2083. After finding his own frequency, QSOs came steadily, if not quickly, with Eric's thirteenth QSO on 40m coming at 1833 UTC with KN4CQB in North Carolina.

In all, Eric made sixteen QSOs, which included nine QRP Afield-eligible QSOs and one POTA P2P QSOs. All of Eric's QSOs were CW and were made at the 5-watt level.