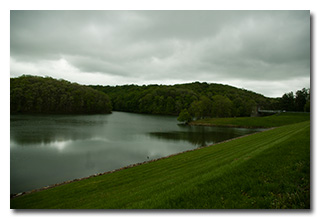 On Wednesday, May 5, 2021, one member of the Southeast Ohio Radio Adventure Team performed a successful two-fer activation of Wayne National Forest (K-4521) and North Country National Scenic Trail in Ohio (K-4239) as part of the Parks on the Air (POTA; link) program. Eric McFadden, WD8RIF, performed the impromptu two-fer activation at Tom Jenkins Dam on a cold, wet afternoon. Thiswas a quick activation to finish off Eric's pursuit of the POTA Oasis Repeat Offender Activator Award for North Country National Scenic Trail and was his twentieth activation of the park. This was Eric's twenty-first activation of Wayne National Forest. Eric was accompanied by the small dogs Theo and Mindy.

Eric arrived at Tom Jenkins dam at 1719 UTC and, finding the wet parking lot completely empty, quickly deployed his 28½' wire vertical on the Jackite 31' telescoping fiberglass mast and drive-on mount. Because of the rain, he set up his KX3 inside the car. Eric was on the air at 1722 UTC. 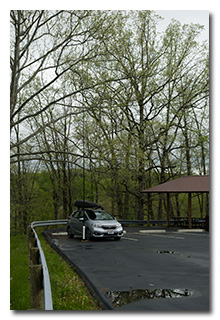 Eric began operations by checking POTA Spots for possible P2P QSOs and made a P2P QSO on 30m with AB9CA who was activating Spring Mill State Park (K-2269) in Indiana.

Finding himself a frequency on 40m, Eric spotted himself to POTA Spots and began calling "CQ POTA". QSOs came steadily, and within thirteen minutes Eric had made ten QSOs.

Eric paused to check POTA Spots for possible P2P QSOs and made a P2P QSO on 20m with K4NYM who was activating Fellsmere Water Management Area State Conservation Area (K-8347) in Florida.

Switching to 30m, Eric made five additional QSOs in about fifteen minutes.

In all, Eric made seventeen QSOs with two P2P QSOs. All of Eric's QSOs were CW and were made at the 5-watt level.