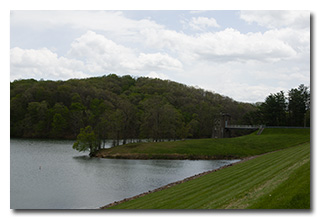 On Friday, April 30, 2021, one member of the Southeast Ohio Radio Adventure Team performed a successful two-fer activation of Wayne National Forest (K-4521) and North Country National Scenic Trail in Ohio (K-4239) as part of the Parks on the Air (POTA; link) program. Eric McFadden, WD8RIF, performed the two-fer activation at Tom Jenkins Dam on a cool and very blustery afternoon. This would be Eric's eighteenth POTA activation of Wayne National Forest and his seventeenth POTA activation of North Country National Scenic Trail.

Eric arrived at Tom Jenkins dam at about 1645 UTC and, finding the parking lot nearly empty, quickly deployed his 28½' wire vertical on the Jackite 31' telescoping fiberglass mast and drive-on mount. Because of the very gusty wind, Eric chose to set up his KX3 inside the car. Eric was on the air at 1707 UTC. 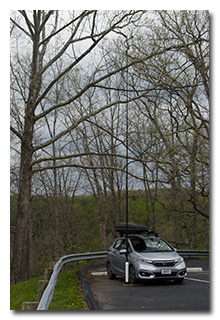 Eric began operations by looking at POTA Spots to identify possible P2P QSOs but band conditions prevented Eric from making any P2P QSOs at this time.

Finding what sounded like a clear frequency on 40m, Eric spotted himself to POTA Spots and began calling "CQ POTA". QSOs were very slow in coming and Eric also began to realize that there was another, very weak, QSO on the frequency. Eric succeeded in making four QSOs before deciding to move to a different 40m frequency and try his luck there. QSOs came more quickly on the new 40m frequency and Eric managed thirteen QSOs in a bit less than half an hour. This run included a P2P QSO with K4EES who was activating Cheaha Resort State Park (K-1037) in Alabama and a P2P QSO with KB3WAV who was performing a "4-fer" activation of Fort McHenry National Monument (K-0928), Captain John Smith Chesapeake National Historic Trail (K-4567), Star-Spangled Banner National Historic Trail (K-4581), and Washington-Rochambeau Revolutionary Route National Historic Trail (K-4582) in Maryland.

In all, Eric made sixteen QSOs, including eight P2P QSOs counting KB3WAV's 4-fer. All of Eric's QSOs were CW and were made at the 5-watt level.

During his activation, the Ohio University Airport reported wind gusts of 37mph. The strong wind caused the Jackite mast's second-from-the-bottom section to collapse but the simple homemade drive-on mast mount proved itself to be capable of supporting the 31' mast even in the gusty wind.