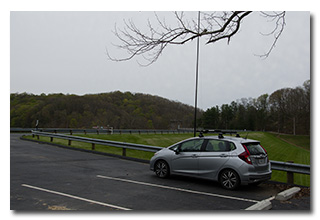 On Saturday, April 24, 2021, one member of the Southeast Ohio Radio Adventure Team participated in the QRP to the Field contest (QRPttF) while simultaneously performing a successful two-fer activation of Wayne National Forest (K-4521) and North Country National Scenic Trail in Ohio (K-4239) as part of the Parks on the Air (POTA; link) program. Eric McFadden, WD8RIF, performed the two-fer activation at Tom Jenkins Dam on a warming but overcast morning on a day that would later bring rain. This would be Eric's seventeenth POTA activation of Wayne National Forest and his sixteenth POTA activation of North Country National Scenic Trail. Eric was accompanied by his small dog, Theo. 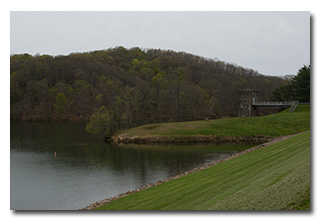 Eric and Theo-dog arrived at Tom Jenkins dam at about 1500 UTC, parked at his favorite parking spot, and quickly deployed his 28½' wire vertical on the Jackite 31' telescoping fiberglass mast and drive-on mount. Because of the threat of rain, Eric chose to set up his KX3 inside the car. Eric was on the air at 1506 UTC.

Eric began operations by looking at POTA Spots for possible P2P QSOs and at 1511 UTC he made a P2P QSO on 20m with N4CD who was activating Spring Creek Forest State Preserve (K-4423) in Texas. 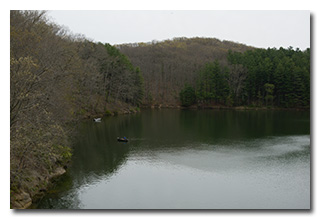 With propagation in the dumps due to the strike of a CME, Eric had expected to have to work a long time to get the ten QSOs required to validate his activations but was pleased QSOs had come so easily. He was also pleased that a fair number of the stations he worked seemed to be participating in the QRP to the Field contest and sent the full QRPttF exchange.

In all, Eric made thirty-three QSOs, including one P2P QSO. All of Eric's QSOs were CW and were made at the 5-watt level.