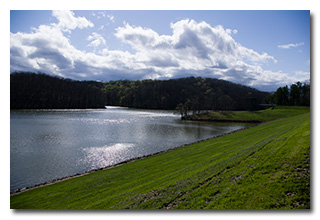 Eric arrived at Tom Jenkins dam at about 1340 UTC and, finding the parking lot nearly empty, quickly deployed his 28½' wire vertical on the Jackite 31' telescoping fiberglass mast and drive-on mount. Because the cool temperature and very gusty wind, Eric chose to set up his KX3 inside the car. Eric was on the air at 1352 UTC.

Eric began operations by looking at POTA Spots to identify possible P2P QSOs and at 1356 UTC he made a 20m P2P QSO with NG5E who was activating Tawakoni Wildlife Management Area (K-6605) in Texas.

Finding a clear frequency on 40m, Eric spotted himself to POTA Spots and began calling "CQ POTA". QSOs came steadily if not particularly quickly and in about twelve minutes Eric had made nine QSOs on 40m.

Before calling it quits, Eric again looked at POTA Spots for possible P2P QSOs but no additional QSOs were made.

In all, Eric made twelve QSOs, including one P2P QSO. All of Eric's QSOs were CW and were made at the 5-watt level.

During his activation, the Ohio University Airport reported wind gusts of 29mph. The strong wind actually rocked Eric's car and at times Eric was concerned that his drive-on base would fail but, despite his fears, the simple wood-and-PVC contraption proved itself to be up to the task of supporting the 31' Jackite mast in the gusty wind.