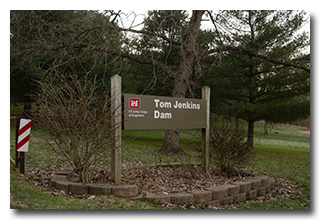 Eric, Miles, and Theo arrived at Tom Jenkins dam in Miles' recently purchased 2016 Subaru Impreza Sport at about 1130 UTC to find one car in the parking lot and whispy fog lying over Burr Oak Lake. Eric directed Miles to park in Eric's preferred outside-edge parking space and the pair quickly deployed the 28½' wire vertical on the Jackite 31' telescoping fiberglass mast and drive-on mount. Because the temperature was well below freezing, Eric chose to set up his KX3 inside the car. Eric was on the air at 1137 UTC. 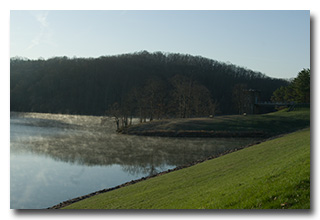 Finding a clear frequency on 40m, Eric spotted himself to POTA Spots and began calling "CQ POTA". Eric had never started an activation this early in the day and he was not sure what to expect. However, QSOs on 40m came quickly and by 1157 UTC Eric had logged the ten QSOs required to validate this two-fer activation.

Following the run on 40m, Eric switched to 80m, spotted himself, and made five QSOs in about eight minutes. This short run of QSOs included QSOs with Eric's friends K8RAT and K4SWL and, surprisingly, a QSO with a station in Texas.

In all, Eric made fifteen QSOs. All of Eric's QSOs were CW and were made at the 5-watt level.