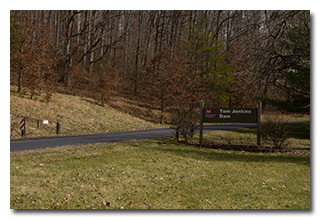 On Saturday, March 13, 2021, one member of the Southeast Ohio Radio Adventure Team performed a successful two-fer activation of Wayne National Forest (K-4521) and North Country National Scenic Trail in Ohio (K-4239) as part of the Parks on the Air (POTA; link) program. Eric McFadden, WD8RIF, performed the activation at Tom Jenkins Dam on an overcast but otherwise quite pleasant late winter day. Eric was accompanied by little dogs Theo and Mindy.

Eric had originally hoped to make a much longer, more aggressive POTA activations-outing on this day, with the intention of visiting three new-to-him POTA units. However, the elevated solar A- and K-Indices, with the very real possibility of terrible HF propagation and the attendant difficulty in making QSOs, caused Eric to ultimately decide to stay closer to home for this POTA outing. Being 75% of the way toward earning a Repeat Offender Activator Award for Burr Oak State Park (K-1939), Eric chose to visit this unit first and, if it were to prove relatively easy to validate the activation of Burr Oak State Park by making ten or more QSOs, he would then proceed the short distance to Tom Jenkins Dam on Burr Oak Lake to perform a two-fer activation of Wayne National Forest (K-4521) and North Country National Scenic Trail (K-4239). It had, in fact, proven to be remarkably easy to validate the activation of Burr Oak State Park, so Eric made the decision to also visit Tom Jenkins Dam. 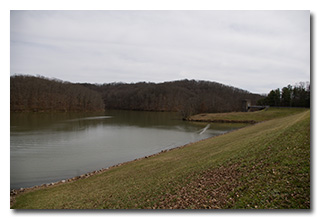 Eric, Theo, and Mindy arrived at Tom Jenkins dam at about 1730 UTC. Eric was able to park in his preferred outside-edge parking space and he quickly deployed his 28½' wire vertical on his Jackite 31' telescoping fiberglass mast which he supported on a drive-on mount. Because it was little bit chilly outside, Eric chose to set up his KX3 inside the car and he installed his KX3 on the car's dashboard. He was on the air at 1855 UTC.

Eric began operations by looking for P2P QSOs and pretty quickly made two, both on 40m. At 1751 UTC, Eric made a P2P QSO with WB2SMK, Mark, who was performing an activation of Erie Canalway Heritage Corridor National Park Reserve (K-6532) in New York and at 1757 UTC he made a P2P QSO with N1RBD who was activating Chattahoochee-Oconee National Forest (K-4473) in Georgia.

Finding a clear frequency on 40m, Eric spotted himself to POTA Spots and began calling "CQ POTA". QSOs on 40m came much more quickly than expected given the solar conditions and by 1830 UTC Eric had logged twenty-one QSOs in this run. This run included a P2P QSO with KT4UE who was activating Powhatan State Park (K-1313) in Virginia.

Following the run on 40m, Eric again checked POTA Spots and made a P2P QSO on 40m with KN4RBN who was activating Hyco State Game Land (K-6913) in North Carolina.

In all, Eric made twenty-four QSOs, which included four P2P QSOs. All of Eric's QSOs were on 40m, were CW, and were made at the 5-watt level.