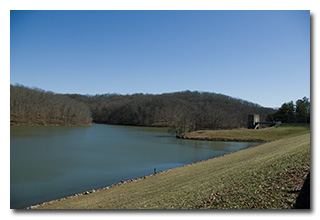 On Sunday, March 7, 2021, one member of the Southeast Ohio Radio Adventure Team performed a successful two-fer activation of Wayne National Forest (K-4521) and North Country National Scenic Trail in Ohio (K-4239) as part of the Parks on the Air (POTA; link). Eric McFadden, WD8RIF, performed the activation at Tom Jenkins Dam on a beautiful Spring-is-almost-here, cloudless, late winter day and was accompanied by his little dog, Theo.

Eric and Theo arrived at Tom Jenkins dam at about 1840 UTC to find several cars in the parking lot and a pickup truck in Eric's set-up location. Eric chose a different space along the far edge of the lot and quickly deployed his 28½' wire vertical on his Jackite 31' telescoping fiberglass mast which he supported on the drive-on mount. Eric chose to set up his KX3 inside the car and installed his KX3 on the car's dashboard and was on the air at 1855 UTC. 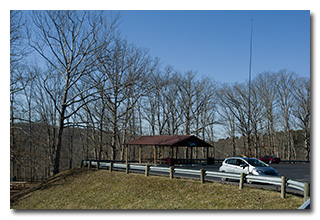 Eric began operations by finding a clear frequency on 40m and spotting himself on POTA Spots and was rewarded with an almost immediate response to his CQ. QSOs came so quickly that Eric was unable to keep up with logging and had to, instead, try to ensure that his CW-copy paper was legible for later transcription. In only nineteen minutes Eric made twenty-one QSOs. This run included a P2P QSO with K0BWR who was activating Perry State Wildlife Area (K-7941) in Kansas. The run ended only when another station began calling CQ exactly on Eric's frequency.

Choosing not fight the interloper on the frequency with his QRP signal and compromise antenna, Eric instead consulted POTA Spots and made a P2P QSO on 40m with KU8T who was activating Yankee Springs State Recreation Area (K-3334) in Michigan.

In all, Eric made twenty-two QSOs, which included two P2P QSOs. All of Eric's QSOs were on 40m, were CW, and were made at the 5-watt level.