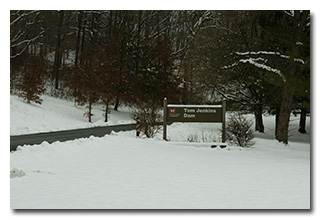 On Saturday, February 13, 2021, one member of the Southeast Ohio Radio Adventure Team performed a successful two-fer activation of Wayne National Forest and North Country National Scenic Trail in Ohio as part of the Parks on the Air (POTA; link). Eric McFadden, WD8RIF, performed the activation at Tom Jenkins Dam on a cold, overcast day and was accompanied by his little dog, Theo.

Eric and Theo arrived at Tom Jenkins dam at about 1930 UTC to find the area only lightly populated. Eric parked his car at the far end of the parking lot and quickly deployed his 28½' wire vertical on his Jackite 31' telescoping fiberglass mast which he supported on the drive-on mount. Because of the low temparture, Eric chose to set up his KX3 inside the car. Eric was on the air at 1947 UTC. 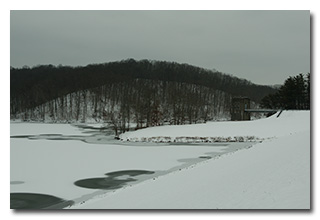 Beginning operations on 80m, Eric's first QSO came at 1952 UTC with his friend K8RAT in central Ohio. This QSO was followed in quick succession with QSOs with K9IS in Wisconsin, VE3LDT in Ontario, and WC0Y in Indiana.

Switching to 40m, Eric's first QSO there came at 2000 UTC with his friend K4SWL in western North Carolina. QSOs came rapidly, with Eric's twenty-ninth QSO on 40m coming at 2029 UTC with K2EKM in Virginia.

In all, Eric made thirty-six QSOs, which included three P2P QSOs. All of Eric's QSOs were CW and were made at the 5-watt level.