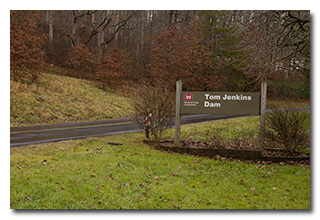 On Sunday, January 17, 2021, one member of the Southeast Ohio Radio Adventure Team performed a successful two-fer activation of Wayne National Forest and North Country National Scenic Trail in Ohio as part of the Parks on the Air (POTA; link). Eric McFadden, WD8RIF, performed the activation at Tom Jenkins Dam on a cold, dreary day with spitting rain and snow and was accompanied by little dogs Theo and Mindy.

Eric, Theo, and Mindy arrived at Tom Jenkins dam at about 1750 UTC to find only two vehicles in the parking area. Eric parked his car at the far end of the parking lot and, after walking the dogs around for a bit, deployed his 28½' wire vertical on his Jackite 31' telescoping fiberglass mast which he supported on the drive-on mount, and set up his KX3 inside the car. Eric was on the air at 1803 UTC. 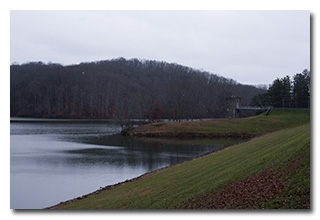 Eric began his operation by looking for P2P opportunities and at 1809 UTC he made a P2P QSO on 20m with W7GFW who was activating Saltwater State Park (K-3262) in Washington.

Switching to 40m, Eric's first QSO there came at 1824 UTC with NT2A in New York. QSOs came steadily, with Eric's sixteenth QSO on 40m coming at 1836 UTC with KA3QLF in Georgia.

In all, Eric made twenty QSOs, which included four P2P QSOs. All of Eric's QSOs were CW and were made at the 5-watt level.