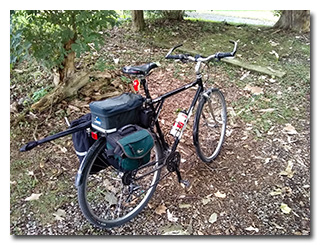 On Saturday, July 25, 2021, one member of the Southeast Ohio Radio Adventure Team performed a successful activation of Wayne National Forest (K-4521) as part of the Parks on the Air (POTA; link) program while also participating in the Adventure Radio Society's Flight of the Bumblebees field operating event as Bumblebee #14.

Because "Bumblebees" are encouraged to use human-power to get to their operating locations, Eric McFadden, WD8RIF, performed the bicycle-portable activation within the Wayne National Forest at the newly-constructed Bailey Trailhead facility in Doanville. Eric had intended to bicycle from his home to the Hockhocking-Adena Bikeway mile-marker 12.5, which is within the Wayne National Forest, but the weather forecast of 50% chance of rain and thunderstorms convinced him he needed to bicycle instead to someplace with a roof, to protect his gear and paper logs from possible precipitation. He had just learned about the newly-constructed Baileys Trailhead facility in Doanville, a facility that includes a nice picnic shelter with two tables, so Eric decided to operate there. He drove to Salina/Beaumont and bicycled the Hockhocking-Adena Bikeway, left the bikeway at SR-691, and wound his way to the trailhead in Doanville, a bicycle-ride of about eight miles, and he didn't encounter any rain during the ride. (See a map of the sixteen-mile-round-trip bicycle-ride: map.) 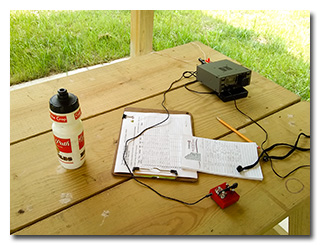 Eric arrived at the new Baileys Trailhead facility in Doanville at about 1700 UTC, right as the Flight of the Bumblebees (FoBB) was starting, and was pleased to find that the picnic shelter was unoccupied. It took him a few minutes to figure out how best to deploy his 28½' end-fed wire antenna but decided finally to run the wire from the K1, up vertically to the top of one of the the picnic-shelter's posts, and then slope it up to the top of his Goture Red Fox 7.2m carbon-fiber telescoping fishing pole, sort of as a gently sloping inverted-L. He deployed the three 17' counterpoise wires and set up his K1 on one of the picnic tables. Because he had previously experienced trouble finding a good match on 40m when connecting the 28½' wire to the K1 through a 4:1 balun, this time he tried connecting the antenna to the K1 through a dual-five-way-binding-post-to-BNC adapter and was pleased that the K1 quickly found a match of 1.2:1 on 40m. Eric was on the air at 1717 UTC. 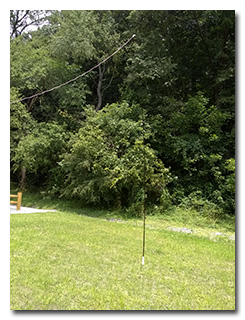 As expected, Eric found he had good cell-signal at this location and would be able to spot himself on the POTA Spots website and to use POTA Spots to identify possible Park-to-Park (P2P) QSOs. However, he decided to concentrate first in making FoBB QSOs and resort to POTA Spots only if he had trouble making ten QSOs to validate the activation of Wayne National Forest. (Wayne National Forest has been activated many times, and very few POTA Hunters actually need it.)

Eric began operations on 40m by hunting for other FoBB participants and at 1720 UTC succeeded in making a QSO with W0ITT, who Eric learned later was performing a POTA activation while also participating in FoBB. This was followed at 1723 UTC with a QSO with N4HAY in North Carolina.

Finding his own frequency to run on 40m, Eric began calling "CQ BB" and by 1744 UTC had completed six more FoBB QSOs with stations in Illinois, Pennsylvania, North Carolina, and Alabama.

Finding his own frequency to run on 20m, Eric began calling "CQ BB" and made two QSOs: the first at 1818 UTC with AC5K in Montana and the second at 1819 UTC with N1RBN who was performing an activation of Chattahoochee River National Recreation Area (K-0662) in Georgia while also participating in FoBB.

Having easily validated his activation of Wayne National Forest by making more than ten FoBB QSOs, and not wanting to tempt the rain and storms to arrive by staying on site any longer, Eric took photos, tore down the station, loaded the bicycle, and began the eight-mile ride back to his car at Salina/Beaumont.

In all, Eric made thirteen FoBB QSOs and validated his activation of Wayne National Forest in just about about an hour without the use of POTA Spots for spotting himself or to find P2P opportunities. All of Eric's QSOs were CW and were made five watts or less.

Eric was pleased with the performance of the Elecraft K1 transceiver—it has good performance and travels well on the bicycle.