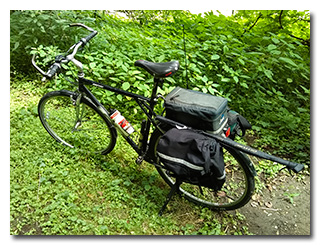 On Saturday, July 10, 2021, one member of the Southeast Ohio Radio Adventure Team performed a successful activation of Wayne National Forest (K-4521) as part of the Parks on the Air (POTA; link) program. Eric McFadden, WD8RIF, performed the impromptu bicycle-portable activation within the Wayne National Forest on the Hockhocking-Adena Bikeway, adjacent to the Hocking River, as a "shake-down" bicycle trip and activation prior to the upcoming Adventure Radio Society Flight of the Bumblebees operating event in which Eric planned to bike to the same location with the same equipment.

For this activation, Eric drove with his bicycle atop his car to West State Street Park in Athens, Ohio, and bicycled approximately nine miles on the Hockhocking-Adena Bikeway to enter the Wayne National Forest at bikeway mile 12.5. Eric arrived at his intended destination about 1545 UTC and found the park bench there to be unoccupied, with nothing happening at the motorcycle racing-track across the river. Eric deployed his 28½' end-fed wire as an inverted-vee supported on his Goture Red Fox 7.2m carbon-fiber telescoping fishing pole and layed out three 17' radials as well as he could without running any of them on the bike path. Eric set up his Elecraft K1 on the bench and was on the air at 1605 UTC.

As expected, Eric found he had good cell-signal at this location and he was able to spot himself on the POTA Spots website and to use POTA Spots to identify possible Park-to-Park (P2P) QSOs.

Eric began operations on 40m and was a bit surprised to find that the K1's internal ATU could provide no better than a 2.5:1 match to the antenna with 4:1 balun on this band but decided to continue his activation. Eric also found that his K1 didn't produce clean code when he used his single-lever paddle as a cootie key—some of the dashes seemed to run together for some reason—so Eric reconfigured his K1 to operate as keyer. Eric's first QSO came at 1606 UTC and was with his good friend K8RAT in central Ohio. This was followed by a P2P QSO at 1609 UTC with ND9M who was activating Greenbrier State Park (K-1575) in Maryland, and a QSO at 1610 UTC with KZ3L in Ohio. 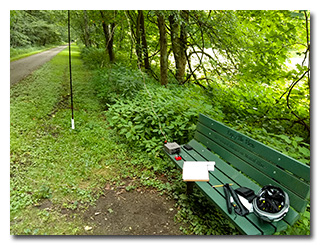 When the QSO rate slowed down, Eric paused to check POTA Spots for P2P opportunities and made a P2P QSO at 1617 UTC on 40m with VA2EO who was activating Montagnes Vertes Nature Reserve (VE-2158) in Quebec, Canada.

So, seven QSOs in the first half-hour—not too bad.

Then, propagation got bad.

Switching to 20m at 1634 UTC, Eric called "CQ POTA" and hunted for P2P QSOs for several minutes but achieved no success.

Returning to 40m at 1650 UTC, Eric called "CQ POTA" for another ten minutes without success.

While pausing again to hunt for P2P opportunities, Eric managed to make a P2P QSO on 40m at 1700 UTC with KN4RBN who was activating Guilford Courthouse National Military Park (K-0718) in North Carolina.

Hoping that propagation might be improving, Eric returned to running a frequency on 40m, and after calling "CQ POTA" for over fifteen minutes, made QSOs in quick succession with KB9RPG in Indiana, WA3TVH in Pennsylvania, KW4FM in Virginia, AA8NN in Ohio, and KD5TXX in Kentucky between 1717 UTC and 1727 UTC. Because his friend K8RAT had texted that Doppler radar indicated approaching rain, Eric quit his operation at this point so he could tear-down and return to his car before the rain arrived.

In all, Eric made thirteen QSOs in ninety minutes, with three P2P QSOs. All of Eric's QSOs were CW and were made five watts or less.

As a "shake-down", this bicycle-portable activation was successful: