There's something for almost everyone. We have two scenic byways, many historic sites, and the communities in southeastern Ohio offer hospitality and attractions to compliment your visit. Whatever interests you in the great outdoors, there's bound to be something on the Wayne National Forest to interest you. Come out and explore America's Great Outdoors! 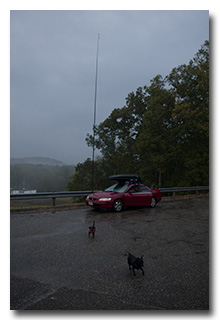 On Sunday, October 6, 2019, one member of the Southeast Ohio Radio Adventure Team performed a successful activation of Wayne National Forest in Ohio as part of the Parks on the Air (POTA; link) program while also participating in the North Georgia QRP Club's Peanut Power Sprint. Eric McFadden, WD8RIF, was accompanied to Tom Jenkins Dam on Burr Oak Lake his wife Vickie, KC8MAJ, and their two dogs, Theo and Mindy.

The annual Peanut Power Sprint runs from 2200 UTC through 2359 UTC but the threat of rain and thunderstorms drove Eric to be on site about forty-five minutes before the start of the event in hopes of setting up the station before the rain arrived. Choosing to operate in the car, Eric deployed his 28½' wire vertical on his 31' Jackite telescoping fiberglass mast supported on his drive-on mount and hung his KX3 on the car's glove-box door. Eric was on the air at 2132 UTC, mere minutes before the rain started.

Wanting to give his good friend and fellow SEORAT-member K8RAT, Mike, a QSO, Eric started operations on 80m and a QSO with Mike was made almost immediately at 2133 UTC.

To take advantage of the California QSO Party, which was to end just as the Peanut Power Sprint was to start, Eric switched to 20m and used hunt-and-pounce to work eight stations in California before the QSO Party ended at 2200 UTC. 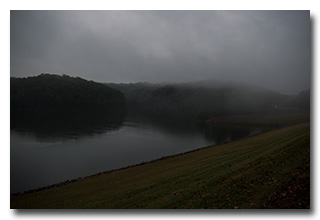 Returning to 80m, Eric made a QSO with WA3TVH at 2206 UTC. Subsequent calls of CQ on 80m at this time went unanswered.

Returning to 80m, Eric made a QSO at 2255 UTC with KC8YTV, Rick, whom Eric had met the night before during a nice 75-minute long bug-to-bug QSO on 80m. Eric's final QSO came at 2312 UTC with K4BAI. Wanting to take advantage of the lull in the rain, and wanting to tear down the station before full darkness arrived, Eric ended his operation after the QSO with K4BAI.