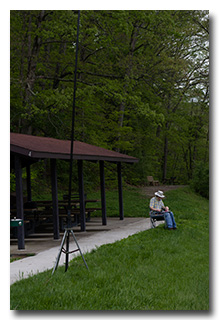 One member of the Southeast Ohio Radio Adventure Team succeeded in performing a valid activation of Wayne National Forest, K-4521, in Ohio as part of the the Parks on the Air (POTA; link) program. Eric McFadden, WD8RIF, visited the Wayne National Forest at Tom Jenkins Dam with his wife, Vickie (KC8MAJ); his son, Miles (KD8KNC); and their two small dogs, Theo and Mindy on an overcast but pleasant spring day.

Eric and his family arrived at Tom Jenkins Dam about 1730 UTC and Eric and Miles quickly set up Eric's station. Eric chose to again deploy his under-test 58' end-fed wire as an inverted-vee, using his 33' MFJ-1910 fiberglass mast to support the wire. He arranged a 28½' wire as a radial directly under the inverted-vee and one 17' wire as a radial directly opposite the first radial. Eric was on the air by 1807 UTC.

Because he had hoped the 58' inverted-L would act as a low-band NVIS antenna, Eric started operations on 80m in the hopes that a QSO with his friend and POTA-Hunter K8RAT could be made. Unfortunately, even with cell-phone coordination, no QSO could be made on 80m. Moving to 60m for the same test, no QSO was made.

Moving to 40m, Eric found the band hopping with New England QSO Party (NEQP) activity. In short order, four NEQP QSOs were made and Eric found a clear frequency on which to call "CQ POTA" and three more QSOs were quickly made.

Moving to 20m, Eric managed just a single QSO with a station participating in the NEQP.

Returning to 40m, managed another NEQP QSO before making his tenth and final QSO, this one a Park-to-Park QSO with N2CX who was activating First State National Historic Park (K-0733) in Delaware.

The 58' end-fed inverted-L antenna with two radials did not lead to QSOs with close-in stations on 80m and 60m but the the KX3's internal ATU found easy matches for the antenna on 20m, 40m, 60m, and 80m. However, Eric found it harder to make QSOs during this operation than he would have expected.