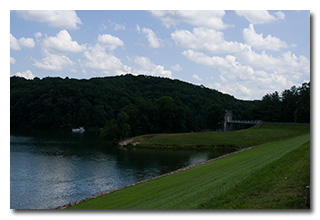 Eric arrived at Tom Jenkins Dam at about 1730 UTC to find some cars already there but, at that point, the visitors appeared to be properly social distancing. Eric parked at the far end of the parking lot, deploying his 28½' wire vertical on his Jackite 31' telescoping fiberglass mast which he supported on his drive-on mount. To help ensure proper social distancing for himself during the continuing coronavirus pandemic, Eric set up his KX3 inside his car, and was on the air by 1741 UTC. Unlike during his usual activations, instead of powering his KX3 with a ten-AA NiMH pack, Eric used a 5Ah gel-cell and a 5-watt photovoltaic panel to charge the battery while it was in use. 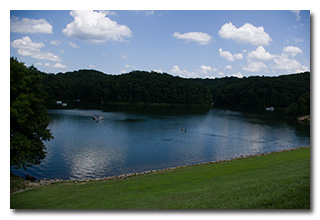 While Eric performed his two activations over a period of about two hours, several car/truck/van loads of college-age men and women arrived at Tom Jenkins Dam. Few in these groups wore masks, and few demonstrated proper social distancing. Most of the young men and, perhaps, a few of the young women partied loudly with cornhole and coolers on the trail just beyond the picnic shelter. This behavior took place just two days after Athens County—which is where Tom Jenkins Dam is located—had been placed at Level 3 (Red) in the Ohio Public Health Advisory System, with a asterisk to indicate the county was approaching Level 4 (Purple). By operating in his car, at the far edge of the parking lot, Eric was able to maintain his own safe social distancing.

Eric chose to activate Wayne National Forest first. Starting on 40m, Eric's first QSO came at 1745 UTC with W8EWH in Michigan. QSOs came at a quickly, with Eric's twelfth QSO coming at 1803 UTC with W8NWG in Illinois. This run of QSOs included a park-to-park (P2P) QSO with WB2SMK who was activating Schodack Island State Park (K-2136) in New York.

Eric's first QSO on 30m came at 1833 UTC with N3COB in Maryland. QSOs came quickly, with Eric's ninth QSO on 30m coming at 1846 UTC with W2XS in New York. This run of QSOs included a second P2P QSO with KN3A who was still activating Poinsett State Park (K-2910) in South Carolina. 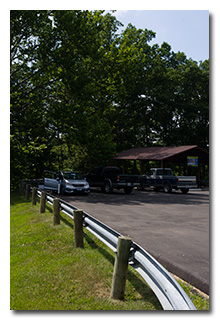 Switching to his activation of North Country National Scenic Trail, Eric again started operations on 40m, with his first QSO coming at 1854 UTC with KB9UWR in Indiana. QSOs came quickly, with Eric's twenty-fourth QSO on 40m coming at 1927 UTC with KK8X in Ohio. This run of QSOs included P2P QSOs with N2ZN who was activating Cayuga Lake State Park (K-2029) and Erie Canalway Heritage Corridor (K-6532) in New York and a P2P QSO with N1RBN who was activating Unicoi State Park (K-2204) in Georgia.

Switching to 20m, Eric's first QSO came at 1931 UTC with KX0R who was performing a Summits on the Air activation. QSOs on 20m came steadily, with Eric's fourth QSO there coming at 1940 UTC with WA5SOG in Arkansas.

Still needing to perform his activation of Burr Oak State Park at a location a few miles away, Eric ended his operation at 1950 UTC.

Eric also submitted his logs for both activations to the World Wide Flora and Fauna in Amateur Radio (WWFF; link) program.