Chinook Fish and Wildlife Area is dedicated to providing quality hunting and fishing opportunities while maintaining 2,140 acres, including approximately 200 acres of open water and marshes. 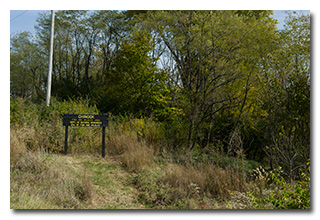 On the afternoon of Saturday, October 22, 2022, one member of the Southeast Ohio Radio Adventure Team performed a successful activation of Chinook Fish & Wildlife Area (K-4190) in Indiana as part of the Parks on the Air (POTA; link) program. Eric McFadden, WD8RIF, performed the activation at the parking area for the Worm Pit and Scheister Pit boat ramps.

This was the first of three planned activations in Indiana and Ohio over a two day period during which Eric, his wife Vickie, and his son Miles were in Indianapolis to experience a flight in a Ford Tri-Motor out of Indianapolis Metropolitan Airport (KUMP). Following the flight in the Tri-Motor, the trio plus the two small dogs, Ginny and Theo, drove eighty-five miles from the airport to the Exotic Feline Rescue Center (info). Because the dogs weren't welcome at the facility, Eric left Vickie and Miles to see the big cats, and he and the dogs drove to nearby Chinook Fish and Wildlife Area to perform the POTA activation. (Eric had toured the EFRC during a previous visit to Indiana.) 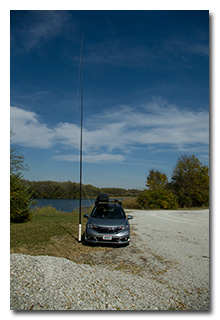 Eric arrived at the Chinook Fish & Wildlife Area about 1700 UTC and selected the parking area at Worm and Scheister Pits as his operating location. Eric had hoped to use his new-to-him FT-817ND for this activation, and there was an available picnic table, but the gusty winds persuaded him to not operate outside. While the small dogs Theo and Ginny explored, Eric deployed the 28½' wire vertical on the Jackite 31' telescoping fiberglass mast supported on his drive-on mast, set up his KX3 inside the car, and was on the air at 1718 UTC.

Eric began operations on 20m by finding himself a clear frequency and beginning to call CQ. Almost as soon as he had begun calling CQ, Theo-dog returned to the car, filthy with something he had rolled in, and Eric had to pause in his CQs in order to clean the little dog. Returning to his key, Eric was pleased to see that he had been automatically spotted on POTA Spots. Eric's first QSO came at 1725 UTC with W4VHH in North Carolina. QSOs came quickly, with Eric's thirteenth QSO coming at 1738 UTC with AB4KN in Georgia. At some point during this run, Eric realized that Ginny-dog wasn't in the car, and he had to pause in order to find her before she, also, found something nasty to roll in. The run on 20m included a QSO with CU3AA in Portugal, a QSO with DL2ND in Germany, a QSO with WB2FUV who was performing a Summits on the Air (SOTA) activation of Big Misery Mountain (W1/MB-023) in Massachussets, a P2P QSO with N1RBD who was performing an activation of Big Lagoon State Park (K-1837) in Florida, a P2P QSO with KN3A who was performing an activation of Susquehanna Riverlands State Park (K-9719) in Pennsylvania, and QSOs with operators located in Portugal, Germany, North Carolina, California, Massachussets, Texas (2), Colorado, New Jersey, Florida, Pennsylvania, Idaho, and Georgia. 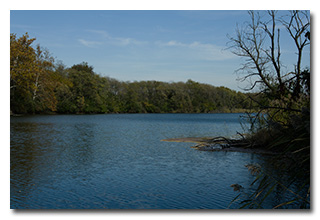 Finding a frequency to run on 40m, Eric began calling CQ and was again quickly auto-spotted on POTA Spots. Eric's first QSO in this run came at 1743 UTC with K0BWR in Kansas. As had been the case on 20m, QSOs came quickly, with Eric's ninth QSO in this run coming at 1754 UTC with W0GIB in Minnesota. This run included QSOs with operators located in Kansas, Ohio (2), Virginia, North Carolina, Kentucky, Georgia, Tennessee, and Minnesota.

Eric finished his operation by checking POTA Spots for P2P QSO opportunities and at 1757 UTC he completed a P2P QSO on 17m with AB1WX who was performing an activation of Pawtuckaway State Park (K-2672) in New Hampshire.

In all, Eric logged twenty-three QSOs. All of Eric's QSOs were CW and were made with 5w output.