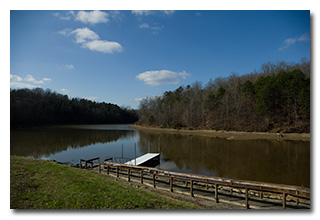 The trio arrived at the fishing area at about 1730 UTC. Parking the car in an end parking space, Eric and Miles deployed Eric's 28½' wire antenna on his 31' Jackite telescoping fiberglass mast and drive-on base. Because of the cool temperature, Eric set up his station in his car and deployed his KX3 on the new mobile-mount on the car's dashboard. Eric was on the air at 1745 UTC. 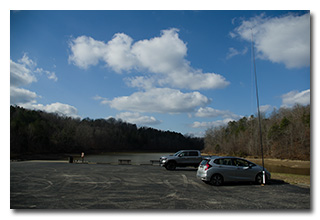 Eric began operations on 80m and his only QSO there came at 1747 UTC with his good friend K8RAT in Ohio.

Switching to 40m, Eric had to go high in the CW portion of the band to avoid CQ World Wide CW Contest activity. His first QSO on 40m came at 1750 UTC with K8RAT. QSOs came quickly, with Eric's 12th QSO on 40m coming at 1806 UTC with WA9DAU in Tennessee. This run included a P2P QSO at 1751 UTC with K0BWR who was performing an activation of Bothwell LodgevState Historic Site (K-3343) in Missouri. 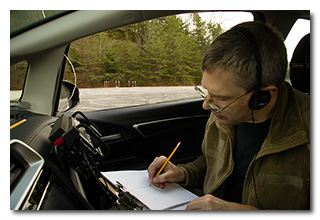 Switching to 30m, Eric's first QSO there came at 1817 UTC with VE3LDT in Ontario. QSOs came quickly, with Eric's ninth QSO on 30m coming at 1833 UTC with NA7C in Utah. This run included a P2P QSO at 1824 UTC with ND9M who was performing an activation of Florida Caverns State Park (K-1867) in Florida.

Check POTA Spots once more, Eric made a P2P QSO on 20m at 1836 UTC with AB9CA who was performing an activation of Organ Pipe Cactus National Monument (K-0954) in Arizona.

In all, Eric made twenty-five QSOs, including five P2P QSOs, in a bit less than an hour or operating. All of Eric's QSOs were CW and were made at the 5-watt level. Miles did not operate but helped with navigation, set-up and tear-down, and photography.