Veterans Memorial WMA is owned by the Kentucky Department of Fish and Wildlife. The property has a variety of important habitat types for game species and declining migratory birds, reptiles and amphibians, including hardwood forests, shrublands, grasslands, and pond. 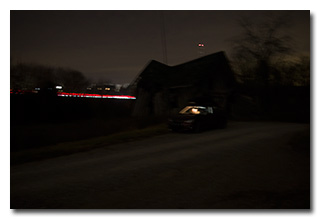 On Sunday, November 27, 2022, two members of the Southeast Ohio Radio Adventure Team performed a successful activation of Veterans Memorial Wildlife Management Area (K-3836) in Kentucky as part of the Parks on the Air (POTA; link) program.

Eric McFadden, WD8RIF, and Miles McFadden, KD8KNC, were traveling from a large family gathering in Versailles, Kentucky to Wright-Patterson Air Force Base near Dayton when they stopped for the activation of Veterans Memorial WMA. They were accompanied by Eric's daughter (and Miles's sister) Kate, KD8KNB, and her five-month-old son Archer, who is not yet licensed. They would be spending the night at Wright-Patt and would be touring the National Museum of the United States Air Force the following day before continuing towards home in southeastern Ohio.

Veterans Memorial WMA lies directly on the route from Versailles to Dayton, and the quartet arrived at the Wildlife Management Area access-point on Rogers Gap Road at about 2330 UTC on Saturday the 26th. Finding a camping trailer set up in the parking area he had hoped to use, Eric directed Miles to continue driving up the road and selected a spot near a dilapidated barn to set up. Because of the need to wait until the start of the new UTC day, he and Miles took their time deploying the station in the nearly complete darkness. Miles deployed the 28½' wire vertical on a 31' Jackite telescoping mast supported on a drive-on base and Eric set up his Elecraft KX3 in the Impreza's open glovebox. Waiting until the top-of-the-hour, Eric was on the air at 0000 UTC on the 27th.

As he had expected with this location being only about 200' from I-75, Eric found he had good cell-signal and he would be able to spot himself on the POTA Spots website and to use POTA Spots to identify possible Park-to-Park (P2P) QSOs. 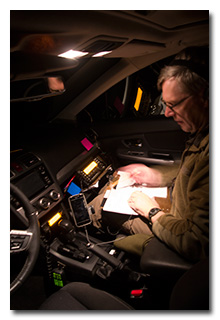 Eric began his operation on 40m by finding a frequency clear of CQ World Wide DX Contest CW activity, spotting himself to POTA Spots, and calling "CQ". Eric's first QSO came at 0002 UTC with K2DW in New York. Despite some interference from a DX SSB station, QSOs came steadily, if not as quickly as Eric would have hoped, with his eighth QSO coming at 0015 UTC with VA2EO in Quebec. This run included QSOs with operators located in New York (3), Kansas, North Carolina (2), Maine, and Quebec.

Switching to 20m, Eric found himself a frequency clear of contest activity, began calling "CQ", and updated his spot on POTA Spots. After calling CQ with no takers for about seven minutes, Eric gave up on 20m and switched to 80m.

Finding himself a frequency on 80m clear of contest activity, Eric spotted himself, texted his buddies K8RAT and K4SWL, updated his spot on POTA Spots, and began calling "CQ". Eric's first QSO on 80m came at 0027 UTC with his buddy K8RAT in Ohio. QSOs came more quickly on 80m than Eric had anticipated, with Eric's fifth QSO in this run coming at 0031 UTC with KY4AE in South Carolina. This run included QSOs with operators located in Ohio, Illinois, Tennessee, Virginia, and South Carolina.

Since there was still over two hours of driving to be done before Wright-Patt would be reached, Eric chose to end his activation at this point and he and Miles tore down the station and re-packed the car.

In all, Eric made thirteen QSOs. All of Eric's QSOs were CW and were made at five watts output.

Eric also submitted his log to the World Wide Flora and Fauna in Amateur Radio (WWFF; link) program for an operation at KFF-3836.