From the park's monument plaques:

In these woods, on Christmas Day, 1837, was fought the battle of Okeechobee, in which a large band of Seminole Indians, under Chiefs Wildcat, Alligator, and Sam Jones, was routed by a brigade led by Colonel Zachary Taylor, consisting of the First, Fourth, and Sixth Regiments of Infantry of the Regular Army, and the First Regiment of Missouri Volunteers, totaling about 800 men. Fighting was close, desperate, and bloody. Losses — Seminoles, unknown; Whites, 28 killed, 111 wounded. This action was the turning point of organized Indian resistance in Florida.

The Battle of Okeechobee Historic State Park is located on a portion of the actual battleground of the second Seminole War's fiercest battle. Federal and Volunteer soldiers, led by Colonel Zachary Taylor, were part of a large army attempting to drive all Indians from Florida. The Seminole, skilled in guerilla tactics, chose a wooded hammock protected by a sawgrass swamp on the north shore of the lake to make their stand. Approximately half of Taylor's force of 850 men, with Missouri Volunteers at the forefront, marched into battle in traditional formation, the others being held in reserve. At the end of the battle approximately a third of the solders who entered the swamp were dead or wounded, including nearly every officer of the Missouri Volunteers and the Sixth Infantry Regiment. As the battle drew to a conclusion, the Seminol took to their canoes, leaving the army in control of the battlefield, giving Taylor the opportunity to claim victory. The Seminole, suffering far fewer casualties, could also claim victory, having stopped the army long enough for the women, children, and elders to escape to the safety of the Everglades. 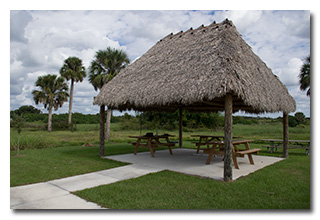 One member of the Southeast Ohio Radio Adventure Team succeeded in performing a valid activation on November 18, 2018 of Okeechobee Battlefield Historic State Park, K-3641, in Florida as part of the the Parks on the Air (POTA; link) program. Eric McFadden, WD8RIF, visited the park on weekday afternoon while returning from Florida's Space Coast to the Gulf Coast.

After Google maps led Eric on what seemed to be a very circuitous route around and through Okeechobee, Eric arrived at the park at 1545 UTC and chose to set up his station in the Chickee Hut Picnic Pavilion in order to avoid sitting in too much direct Florida Sun. Eric's station consisted of his Enhanced KX3 Travel Kit and his 28½' end-fed wire supported as an inverted-L on a Black Widow 20' telescoping pole and fed through an Elecraft 4:1 balun. Eric found that his experimental, short, airline-friendly, spike was insufficiently long to support the Black Widow mast in the light, sandy soil near the chickee hut and he instead used his regular, longer spike to support the mast. Eric was on the air by 1600 UTC.

Eric began operations on 20m and, with spotting help from K8RAT, made seven QSOs in thirty-five minutes. Eric changed to 40m and made four QSOs there in eleven minutes, again with K8RAT's spotting-support.

The park must have been near an airport because Eric watched many light airplanes fly over, including a radial-powered biplane. Eric was pleased to work his friend K8RAT and fellow POTA participant VE3ZN.

Eric also submitted his log to the World Wide Flora and Fauna in Amateur Radio (WWFF; link) program although his eleven QSOs were not sufficient to achieve a valid activation within the program which requires 44 QSOs be made.