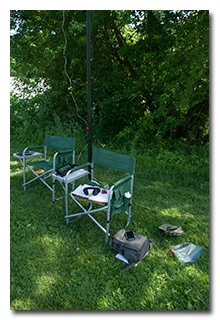 On Sunday, May 29, 2022, one member of the Southeast Ohio Radio Adventure Team performed a successful activation of Muskingum River State Park in Ohio as part of the Parks on the Air (POTA; link) program.

Having decided that his goal within POTA for early 2022 would be to earn the Oasis Repeat Offender Activator Award for Muskingum River State Park by visiting all ten of the river-navigation locks and dams that make up the state park at least once each, Eric McFadden, WD8RIF, returned to McConnelsville Lock and Dam #7 on a beautifully sunny day, accompanied by his wife Vickie, KC8MAJ; Miles McFadden, KD8KNC; and little dogs Theo and Ginny. (The family had adopted little Ginny just the day before, and this was Ginny's first outing with the family.)

This was Eric's twentieth activation of Muskingum River State Park, with his twenty activations having occurred at... 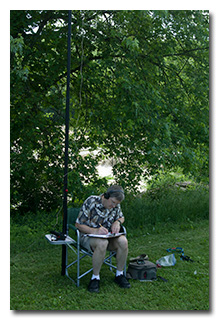 Eric, Vickie, Miles, and the dogs arrived at the dog park on McConnell's Island at the McConnelsville Lock and Dam #7 at about 1845 UTC to find the island to be unnoccupied except for some geese. Selecting a bit of shade, strapping his 31' Jackite telescoping fiberglass mast to his folding camp-chair to support his 28½' wire vertical, and placing his Elecraft KX3 on the camp-chair's fold-up table, Eric was on the air at 1904 UTC.

As he had expected, Eric had good cell-signal and was able to use to POTA Spots (link) to spot himself and to look for park-to-park (P2P) QSO opportunities.

Eric began operations on 40m by selecting a frequency to run and calling CQ. Eric was pleased to see that the POTA Spots algorithm properly spotted him based on his Reverse Beacon Network (RBN) spot. Eric's first contact came at 1906 UTC with N4TIZ in North Carolina. This was followed at 1909 UTC by a QSO with KY4IE in Virginia.

Pausing to check POTA Spots, Eric made a P2P QSO on 20m with K4NYM who was activating Colt Creek State Park (K-1848) in Florida. 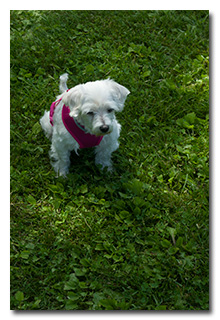 In all, Eric made twenty-two QSOs, including three P2P QSOs. All of Eric's QSOs were CW and were made with five watts output. 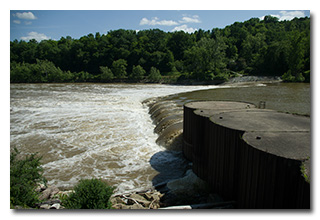 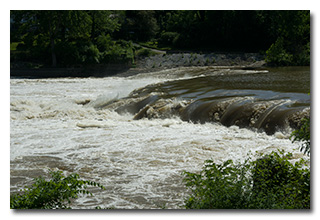 The Muskingum River roars over the dam, viewed from McConnell's Island

The Muskingum River roars over the dam, viewed from
McConnell's Island, with Miles, Theo, and Ginny


Following station tear-down, Eric and the family crossed the Muskingum River into the town of Malta to see the dam from the other side of the river. 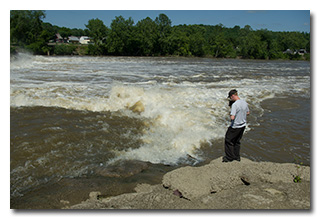 The Muskingum River roars over the dam, viewed
from the Malta side of the river, with Miles and Theo 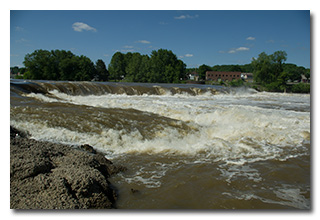 The Muskingum River roars over the dam,
viewed from the Malta side of the river

The Muskingum River roars over the dam, viewed from the Malta side of the river