(Ellis Lock and Dam #11) Enjoy the remoteness and scenery of this area, which includes Powelson Wildlife Area. A partially constructed bike trail parallels the river. A short distance downstream you pass under a bikeway located on an abandoned railroad trestle. Zanesville Yacht Club, about 6.3 miles downstream, offers gas to boaters when open. 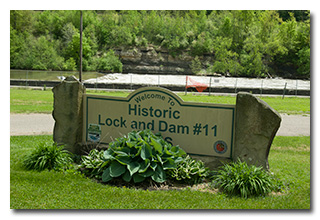 On Friday, May 13, 2022, one member of the Southeast Ohio Radio Adventure Team performed a successful activation of Muskingum River State Park in Ohio as part of the Parks on the Air (POTA; link) program.

Having decided that his goal within POTA for early 2022 would be to earn the Oasis Repeat Offender Activator Award for Muskingum River State Park by visiting all ten of the river-navigation locks and dams that make up the state park at least once each, Eric McFadden, WD8RIF, returned to Ellis Lock and Dam #11 on a beautifully sunny day, accompanied by his wife Vickie, KC8MAJ, and their little dog Theo, on the 30th anniversary of Eric's and Vickie's marriage. As an added bonus, Norm Meyers, N9MM, had arranged to meet Eric at Ellis Lock #11. Norm was in Ohio on a multi-state World Wide Flora and Fauna in Amateur Radio (WWFF) and POTA adventure that would see him traveling from his home in Texas in an RV and would have him performing WWFF/POTA activations in Arkansas, Missouri, Illinois, Indiana, Michigan, Ohio, and Tennessee before arriving back in Texas. On this day, Norm would be performing his first WWFF/POTA activation of Ohio's Muskingum River State Park.

This was to be Eric's nineteenth activation of Muskingum River State Park, with his previous activations having occurred at...

Eric and Vickie arrived at Ellis Lock and Dam #11 at about 1615 UTC and found Norm busy racking up QSOs. While little Theo-dog eagerly explored the area, Eric and Vickie spent about an hour chatting with Norm about WWFF, POTA, Norm's travel plans, and other and varied topics. Eric enjoyed seeing Norm's WWFF/POTA set-up: a 100w Elecraft K3 in Norm's plug-in hybrid car, a 20m vertical dipole on a 40' Spiderbeams telescoping mast, and a mag-mount Hustler with multiple resonators on the car roof for the other bands. 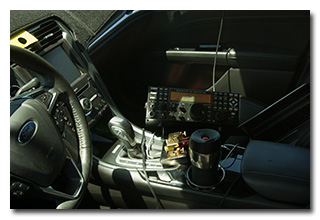 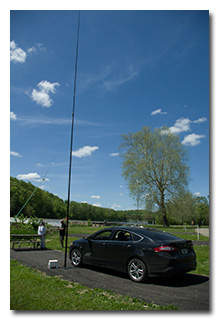 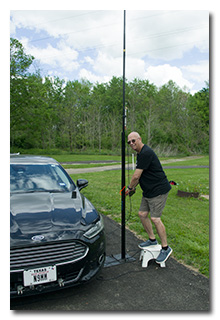 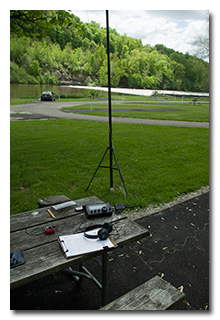 After a picnic lunch in the shade of a nicely-located tree in one of the available primitive camping sites, Eric decided to perform his activation on the same picnic table and deployed his 28½' wire vertical on his 33' MFJ-1910 telescoping fiberglass mast repurposed TV-antenna roof-top tripod and set up his KX3 on the picnic table.

Eric tried to start his operation on 40m but found his KX3 with KXAT3 internal automatic antenna tuner was unable to find a match on 40m. First, suspecting his homemade 4:1 unun, Eric swapped it out for a dual binding-post to BNC adapter but the KX3 was still unable to find a match. He then swapped one of the 17' counterpoise wires for the 28½' radiator and, even with the 17' wire still lying on the ground, the KX3 quickly found a match. With this information, Eric knew the problem was with his 28½' wire. Noticing that receiver-noise increased when he fiddled with the banana-plug feedpoint, Eric made a field-repair of his antenna by removing the banana-plug, cutting off about an inch of the wire and re-stripping it, and re-installing the banana-plug. After this, the KX3 was able to quickly find a match and Eric was ready to proceed with his activation.

Unlike at Eric's previous visit to Ellis Lock and Dam #11, Eric found he had essentially no cell-signal, but Norm had enough signal on his phone to spot Eric to POTA Spots (link).

Eric started his operation on 40m by finding himself a frequency to run and calling CQ while Norm spotted Eric to POTA Spots. Eric's first QSO came almost immediately at 1718 UTC with his friend K4SWL in western North Carolina. As this QSO ended, Norm walked to his car and provided Eric with a P2P QSO at 1719 UTC as N9MM and a P2P QSO at 1720 UTC as NR5DX, the club callsign of the Sam Houston National Forest for which Norm is the trustee. QSOs on 40m came steadily, with Eric's eleventh QSO coming at 1739 UTC with W8SCS in Michigan. This run included QSOs with operators located in North Carolina (2), Ohio (3), Michigan (3), Tennessee, Pennsylvania, and Virginia.

Switching to 20m, Eric found a frequency to run and called CQ while Norm updated Eric's spot on POTA Spots. Eric's first QSO on 20m came at 1745 UTC with AJ5ZX in Texas. QSOs came quickly, with Eric's eighth QSO on 20m coming at 1752 UTC with N9AGK who was activating Tuskegee National Forest (K-4451) in Alabama. This run included two more P2P QSOs with Norm operating as N9MM and NR5DX and QSOs with operators located in Texas (2), Ohio (2), Oklahoma (2), Nova Scotia, and Alabama.

When QSOs stopped coming on 20m, Eric called it quits and he and Norm chatted a bit more as Eric photographed his station, Norm's station, and Ellis Lock #11 and the Muskingum River.

In all, Eric made nineteen QSOs, including five P2P QSOs. All of Eric's QSOs were CW and were made with five watts output. 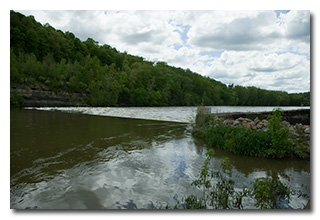 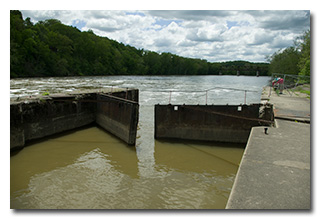 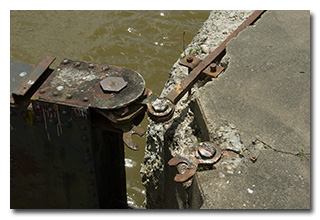 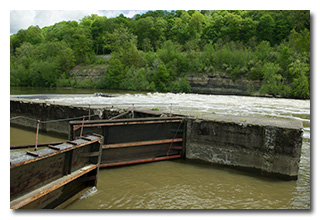 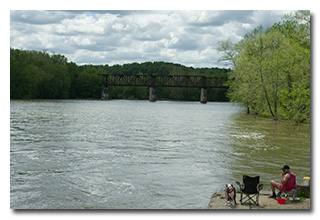 Following this activation and the subsequent activation of Powelson Wildlife Area (link), while killing time before their anniversary dinner-date, Eric and Vickie visited Historic Lock #10 Canal Park in Zanesville, which is part of the Muskingum River State Park, where Eric saw Indiana & Ohio GP38-2 #2165 and Ohio Central B23-S7 #4092 locomotives drifting light across the Muskingum River and across the lock-canal on the old swivel-bridge. 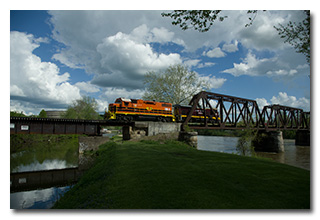