The bypass canal at Beverly is where the explosion of the sidewheeler Buckeye Belle occurred in 1852 with great loss of life.

Pictures, the dam at McConnelsville Lock and Dam #7

On Friday, April 29, 2022, one member of the Southeast Ohio Radio Adventure Team performed a successful activation of Muskingum River State Park in Ohio as part of the Parks on the Air (POTA; link) program.

Having decided that his goal within POTA for early 2022 would be to earn the Oasis Repeat Offender Activator Award for Muskingum River State Park by visiting all ten of the river-navigation locks and dams that make up the state park, Eric McFadden, WD8RIF, accompanied by his little dog Theo, had planned to return to Beverly Lock and Dam #4 on what turned out to be a surprisingly beautiful afternoon.

This was to be Eric's seventeenth activation of Muskingum River State Park, with his previous activations having occurred at...

Following a succesful activation of Desonier State Nature Preserve (K-9404) (link), Eric arrived at the still-undergoing-reconstruction Beverly Lock and Dam #4 at about 1515 UTC with the plan to perform his activation at the lock's canoe-launch area as he had on a previous visit (link). However, upon arrival, he found that the canoe-launch area was also now inaccessible, the entrance blocked by highway cones and the parking area itself full of heavy equipment involved in the reconstruction of the lock. 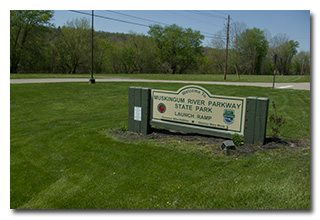 Disappointed but unfazed, Eric aimed his car north and made the short drive to the McConnelsville Boat Launch, which is an official part of the Muskingum River State Park, arriving there about 1545 UTC. After a bit of exploration, a walk with Theo-dog, and a visit to the facilities for himself, Eric chose to park his car in one of the campsites, all of which were unoccupied, deployed his 28½' wire vertical on a Jackite 31' telescoping fiberglass mast and drive-on mount and, because the weather so absolutely lovely, set up his KX3 on his folding camp-chair at the base of the mast. Eric was on the air at 1556 UTC.

As at his previous visit to the nearby McConnelsville Lock and Dam #7, Eric found he had excellent cell-signal, and he was able to spot himself on POTA Spots (link) and to use POTA Spots to identify possible park-to-park (P2P) QSO opportunities. 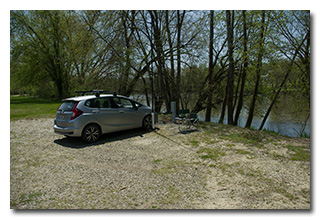 After having had an almost non-existent noise floor at Desonier State Nature Preserve only a couple of hours previously, Eric was disappointed to find he had an S5+ noise floor on 40, 30, and 20m at this new location. His friend K8RAT in central Ohio, and his friend K4SWL activating New River State Park (K-2748) in western North Carolina individually confirmed via text that they, too, were hearing significantly increased noise-levels on the HF bands, so Eric knew that the noise was atmospheric, not local.

Determined to see this adventure through, Eric began his operation by finding himself a frequency to run on 40m, calling CQ, and spotting himself to POTA Spots. After about four minutes of calling CQ, Eric was rewarded with a QSO at 1600 UTC with KE9IX in Indiana. Eric sent KE9IX a signal report of "229", and hoped that this poor signal report wasn't a harbinger of things to come. QSOs thereafter came slowly, with Eric's ninth QSO in this run coming over half an hour later, at 1636 UTC with KZ4KX in Kentucky. During this run, Eric gave out signal reports of "229" to seven of the nine stations worked, he gave a signal report of "119" to one station, and only one station received a report of "599"; there were two periods in this run during which he called CQ for ten minutes without receiving any replies—conditions on HF clearly were bad. This run included one P2P QSO with KN3A who was activating Captain John Smith Chesapeake National Historic Trail (K-4567) in Pennsylvania and QSOs with operators located in Indiana, Tennessee (2), North Carolina, Illinois, Pennsylvania, Virginia (2), and Kentucky. After completing the QSO with KZ4KX, Eric called CQ for another nine minutes without any responses before deciding to switch to 20m.

Finding a frequency on 20m to run, Eric began calling CQ and spotted himself to POTA Spots. Six minutes of calling CQ on 20m resulted in a single QSO, at 1649 UTC, with W0LGU in Minnesota, who received a signal report of 559.

Switching to 30m, Eric called CQ for seven minutes but was rewarded with only one QSO, at 1657 UTC, with AB1X in Massachusetts, who received a signal report of 339.

Eric was pleased to have been able to successfully validate his seventeenth activation of Muskingum River State Park but was surprised at how long it took to complete his required ten QSOs. On the other hand, the weather was so lovely that Eric found he hadn't minded spending an hour with his KX3 mostly sending CQ in beacon-mode.

In all, Eric made eleven QSOs, including a single P2P QSO, taking almost exactly an hour. All of Eric's QSOs were CW and were made with five watts output.

Following a quick picnic lunch, Eric tore down his station and he and Theo explored the boat launch area and Eric took photographs. 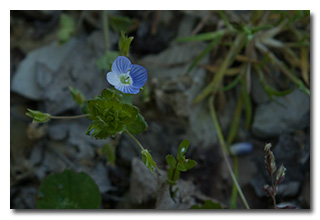 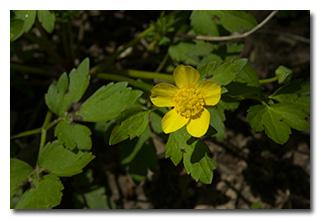 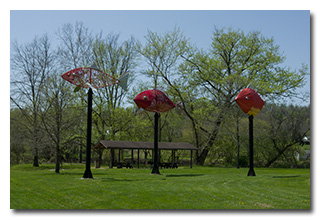 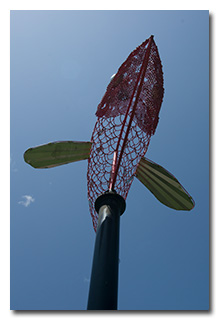 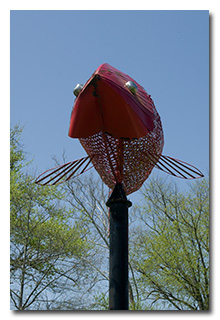 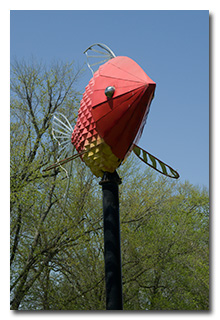 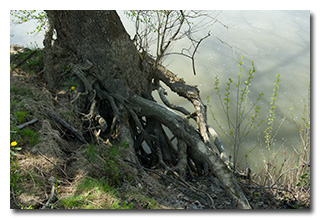 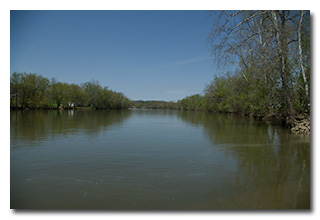 Before beginning the drive home, Eric and Theo visited the dam at the McConnelsville Lock and Dam #7 since Eric wanted to later do an activation at that location. At the dam, Eric discovered that what's now a pedestrian bridge over the lock's bypass canal is actually a swing-bridge, built to allow taller boats to pass through the lock. He also discovered that the grassy area at the dam between the Muskingum River and the canal is now a dog-park, a fact which he might need to consider if he is to return there for an activation later this Spring. 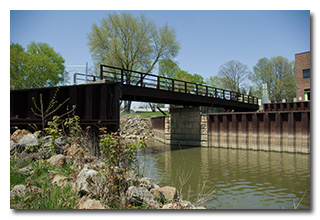 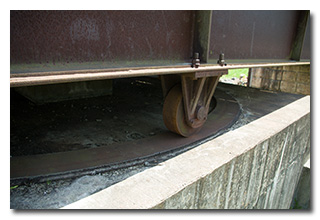 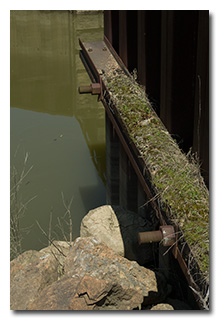 As at each of the locks-and-dams he has visited on the Muskingum River, Eric was mesmerized by the sight and the sound of the water flowing over the dam. 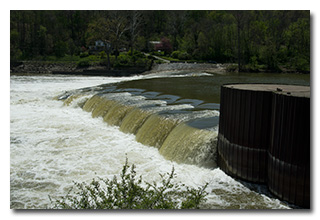 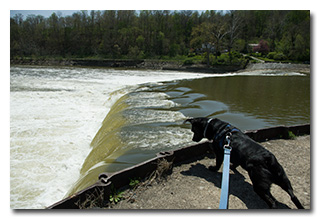