Located near the communities of Philo and Duncan Falls, the Philo Lock was formerly known as the Taylorsville Dam, constructed to harness water power to operate a saw and flour mill.

(Zanesville Lock) The Y Bridge crosses the river where the Licking River empties into the Muskingum just below the dam. Built between 1837 and 1841, this tandem lock (the only one in the system) has mitered wood gates. The original bypass canal, built in 1816, serves as the earliest civil engineering improvement on the river and was constructed as an attempt to circumvent the Falls at Zanesville. The long, narrow island adjacent to the lock is the location of the original lock tender’s house. A former towpath used for the canal is maintained as park land. 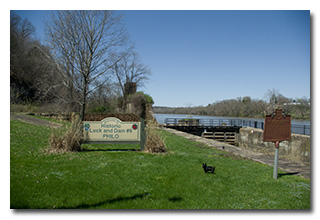 On Friday, April 15, 2022, one member of the Southeast Ohio Radio Adventure Team performed a successful activation of Muskingum River State Park in Ohio as part of the Parks on the Air (POTA; link) program.

Having decided that his goal within POTA for the next few months would be to earn the Oasis Repeat Offender Activator Award for Muskingum River State Park by visiting all ten of the river-navigation locks and dams that make up the state park, Eric McFadden, WD8RIF, returned to Philo Lock and Dam #9 on a brilliantly sunny but very windy day. Eric was accompanied by his little dog Theo.

This was to be Eric's sixteenth activation of Muskingum River State Park, with his previous activations having occurred at... 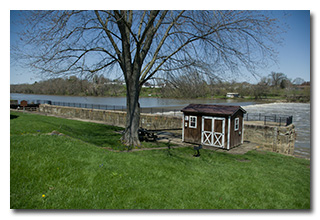 Following a succesful two-fer activation of Blue Rock State Park (K-1936) / Blue Rock State Forest (K-5436) (link), Eric arrived at Philo Lock and Dam #9 at 1645 UTC. Finding the lock park to be empty, Eric parked the car, walked Theo, took photos, and, for a change, deployed his half-size W3EDP on a Jackite 31' telescoping fiberglass mast strapped to the wooden overlook platform. Because of the strong winds, Eric set up his KX3 inside the car. Eric was on the air at 1707 UTC.

As at his previous visit to Philo Lock and Dam #9, Eric had found he had excellent cell-signal, and he was able to spot himself on POTA Spots (link) and to use POTA Spots to identify possible park-to-park (P2P) QSO opportunities. 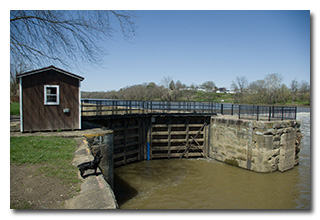 Upon powering up his station, Eric immediately noticed S9-level noise on 40m and S7-level noise on 20m. Choosing to avoid this noise, Eric began operations on the quieter 30m band, calling "CQ POTA" and spotting himself. Many minutes of calling "CQ" failed to produced a single QSO. Suspecting his half-size W3EDP to be the problem, Eric dropped that antenna and deployed his 28½' wire vertical, and continued to call "CQ". After still no QSOs on 30m, Eric switched to 40m, and then to 20m, where his calls failed to produce a single QSO. Clearly, propagation conditions had changed during the short drive from Blue Rock State Park. Eric's friend K8RAT confirmed via text that fast solar wind and a coronal mass ejection had conspired to wipe out the bands.

Finally, at 1745 UTC, after nearly forty minutes of calling "CQ" on 40, 30, 20, and 15m, and trying to work other activators identified via POTA Spots, Eric managed to complete a QSO on 30m with KB9J in Illinois. Twenty minutes later, at 1805 UTC, Eric barely managed to complete a second QSO, this time on 20m, and with W4HXH in Florida. At this point, Eric had been at Philo Lock and Dam #9 for over an hour—two QSOs in a hour is NOT a good rate! 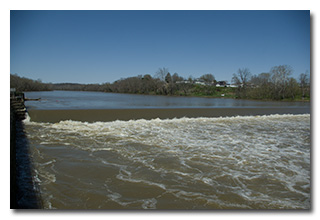 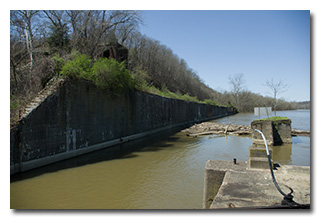 Being unwilling to have a failed activation, and in the hopes that at least some of the S7 to S9 noise on the bands might be from a local source, Eric chose to tear down his station and drive the ten miles from Philo Lock and Dam #9 to Zanesville Lock and Dam #10, and try to validate his activation of Muskingum River State Park there. 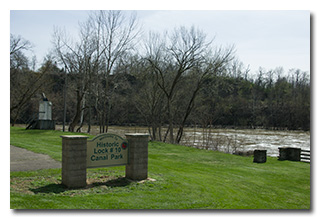 Eric arrived at the Lock #10 Canal Park on the island between the Muskingum River and the lock's canal, at Zanesville's famous Y-Bridge, at about 1830 UTC, parked the car, walked Theo, and quickly deployed his 28½' wire vertical on a Jackite 31' telescoping fiberglass mast and drive-on mount, and was on the air at 1845 UTC. Eric immediately noticed less noise on the HF bands and K8RAT confirmed via text that the solar wind speed had begun dropping.

Eric began operations on 40m by finding himself a frequency to run, calling "CQ POTA", and spotting himself to POTA Spots. Eric's first QSO at Zanesville Lock and Dam #10 came at 1848 UTC with KO4RSJ in Virginia. This was followed at 1849 UTC by a QSO with KB9RPG in Indiana, and at 1850 UTC by a QSO with K9IS in Wisconsin. At this point, QSOs stopped coming and Eric knew that even though the bands were better, they hadn't yet fully recovered, because during normal conditions it's rare that 40m won't easily provide the ten QSOs needed to validate an activation. 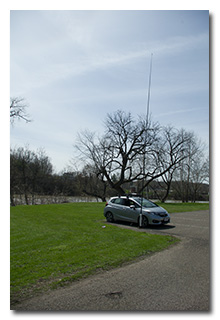 Eric switched to 20m and his first QSO there came at 1855 UTC with KD2OMV in Florida. Conditions on 20m must have been better than on 40m because QSOs came steadily, with Eric's eighth QSO in this run coming at 1904 UTC with K5PE in Texas. This run included a challenging QSO with F5UQ in France and QSOs with operators located in Florida (2), Texas (4), and Louisiana.

Finally, Eric checked POTA Spots for P2P QSO opportunities and at 1910 UTC he completed a P2P QSO on 20m with K0DME who was activating Boyd Lake State Park (K-1210) in Colorado.

Eric was very pleased and satisfied to have managed to validate his activation of Muskingum River State Park during these extremely challenging conditions, even though it took him over two hours to make just fifteen QSOs. All of Eric's QSOs were CW and were made with five watts output.

After he completed his operation, Eric and Theo explored the canal-island while Eric took photos, and then drove to the public access area at the dam to see and hear the power of the water rushing over the dam. 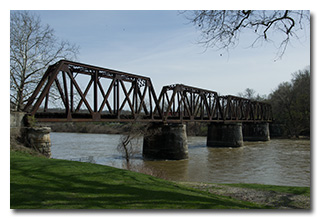 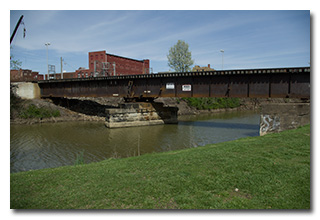 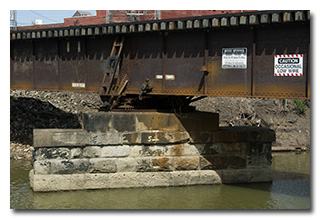 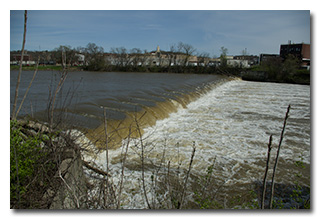 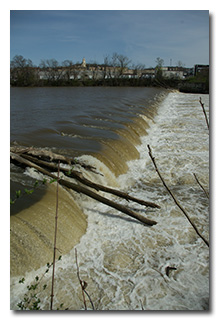