The bypass canal at Beverly is where the explosion of the sidewheeler Buckeye Belle occurred in 1852 with great loss of life. 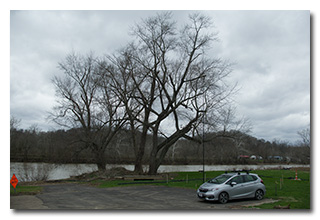 On Friday, March 25, 2022, one member of the Southeast Ohio Radio Adventure Team performed a successful activation of Muskingum River State Park in Ohio as part of the Parks on the Air (POTA; link) program.

Having decided that his goal within POTA for the next few months would be to earn the Oasis Repeat Offender Activator Award for Muskingum River State Park by visiting all ten of the river-navigation locks and dams that make up the state park, Eric McFadden, WD8RIF, visited Beverly Lock and Dam #4 on a cold, windy, overcast day, arriving at the lock at about 1530 UTC. Eric was accompanied by the little dogs Mindy and Theo.

This was to be Eric's thirteenth activation of Muskingum River State Park, with his previous activations having occurred at... 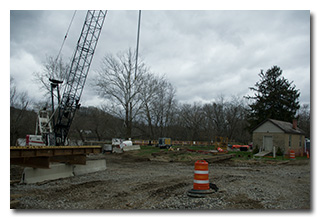 Before arriving at the lock itself, Eric drove along Zanesville Street to find and enjoy the sound of the water roaring over the dam. Returning at the lock itself, Eric parked his car in the canoe-launch parking area adjacent to the lock because the lock is currently in the middle of a complete reconstruction. After walking the dogs, Eric deployed his 28½' wire vertical on a Jackite 31' telescoping fiberglass mast and drive-on mount and, because of the cold temperature and wind, set up his KX3 inside the car. Eric was on the air at 1546 UTC.

As he had hoped, Eric found he had good cell-signal at Beverly Lock and Dam #4 and he was able to spot himself on POTA Spots (link) and to use POTA Spots to identify possible park-to-park (P2P) QSO opportunities.

As soon as Eric powered up his KX3, he noticed a high noise-level on 40m and he verified a similar high noise level on 30m and 20m. During this activation, Eric wasn't able to determine if this noise is local to Beverly or if solar conditions were causing the high noise level. Still, the noise wasn't so high it would prevent success, so Eric soldiered on with his activation.

Eric began operations by checking POTA Spots for P2P QSO opportunities and at 1549 UTC he completed a P2P QSO on 30m with K5EDM who was activating DeGray Wildlife Management Area (K-7523) in Arkansas. 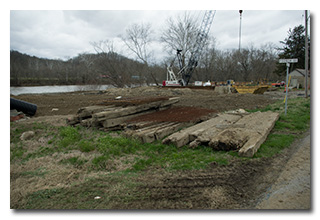 Finding his own frequency on 40m to run, Eric began calling "CQ POTA", and spotted himself. His first QSO on 40m came at 1552 UTC, even before he could finish spotting himself, with his good friend K8RAT in central Ohio. QSOs came steadily, if a bit slower than Eric would have expected, with his fifteenth QSO on 40m coming at 1610 UTC with KS3F in New Jersey. This run included QSOs with operators located in Ohio (2), Wisconsin (2), Virginia, Tennessee (2), North Carolina, West Virginia, Indiana (2), Pennsylvania (2), Illinois, and New Jersey. All of these stations were very weak into Eric's station, with Eric reporting RST of 539 to most of them. His reports from the other station were low, too, with several stations reporting 539 or lower. The low signal strengths leads credence to the idea that the sun was doing something negative to the ionosphere.

Pausing to check POTA Spots again for P2P QSO opportunities, at 1614 UTC Eric made a P2P QSO on 40m with N3VO who was activating Chesapeake and Ohio Canal National Historical Park (K-0015) in Maryland.

Switching to 30m, Eric found a frequency to run, began calling "CQ POTA", and updated his spot. Eric's first QSO on 30m came at 1617 UTC and was a P2P QSO with K0BWR who was activating Leavenworth State Fishing Lake (K-7390) in Kansas. QSOs on 30m came a little bit more quickly than QSOs on 40m had come, with Eric's eighth QSO in this run coming at 1628 UTC with W1VKE in Massachusetts. This run include QSOs with operators located in Kansas, Massachusetts (2), Georgia (2), Florida, Alabama, and New Hampshire. Eric found that signals on 30m were slightly stronger than the signals on 40m had been if, perhaps, not by much.

Switching to 20m, Eric found a frequency to run, began calling "CQ POTA", and updated his spot. Eric's first QSO on 20m came at 1634 UTC with W6TED in California. QSOs came quickly, with Eric's sixth QSO on 20m coming at 1641 UTC with W8TK in Arizona. This run included a second P2P QSO with K0BWR who was still activating Leavenworth State Fishing Lake (K-7390) in Kansas and QSOs with operators located in California, Texas, Nova Scotia, Oklahoma, Kansas, and Arizona. As on 40 and 30m, signal-strengths were low; in fact, Eric sent only reports of 539 or 559 on 20m.

In all, Eric made thirty-one QSOs, including four P2P QSOs. All of Eric's QSOs were CW.