Located near the communities of Philo and Duncan Falls, the Philo Lock was formerly known as the Taylorsville Dam, constructed to harness water power to operate a saw and flour mill. 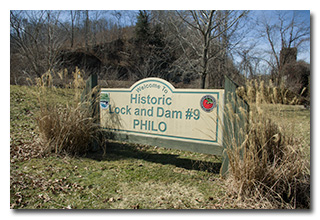 On Friday, March 4, 2022, one member of the Southeast Ohio Radio Adventure Team performed a successful activation of Muskingum River State Park in Ohio as part of the Parks on the Air (POTA; link) program.

Having decided that his goal within POTA for the next few months would be to earn the Oasis Repeat Offender Activator Award for Muskingum River State Park by visiting all ten of the river-navigation locks and dams that make up the state park, Eric McFadden, WD8RIF, visited Philo Lock and Dam #9 on a cool but beautifully sunny day, arriving at the lock at about 1540 UTC. Eric was accompanied by his little dog Theo.

This was to be Eric's ninth activation of Muskingum River State Park, with his previous activations having occurred at... 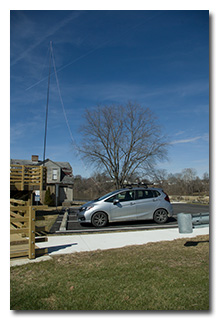 Finding a place for his car in the brand-new paved parking lot, Eric first walked little Theo while considering ways to deploy his speaker-wire W3EDP Jr., an experimental half-size W3EDP end-fed Zepp antenna fashioned from a single length of speaker-wire which he was hoping to test for the first time.

After noticing the sturdy handrail-posts on the elevated lock-overlook, Eric lashed his 31' Jackite telescoping mast to the posts using bungie cords and deployed his W3EDP Jr. as a slightly wonky inverted-vee. Because it wasn't quite warm enough for a comfortable outdoor operation, Eric set up his KX3 inside the car. Eric then verified that his KX3's internal automatic antenna tuner could easily find good matches for all nine HF bands, 10m through 80m, inclusive. Eric was on the air and ready to begin making QSOs at at 1603 UTC.

As he had hoped he would, Eric found he had good cell-signal at Philo Lock and Dam #9 and he was able to spot himself on POTA Spots (link) and to use POTA Spots to identify possible park-to-park (P2P) QSO opportunities.

Eric began his operation by consulting POTA Spots to identify possible P2P QSO opportunities. It was this point that he noticed two things: 1.) a 40m noise-floor of S6 and 2.) few POTA activators were operating on either 40m or 20m. Given the possibility—later confirmed—that the Earth was being struck by a coronal mass ejection (CME) from the Sun, Eric chose to not seek P2P QSOs at that time and concentrate on validating his activation before band conditions could degenerate further. 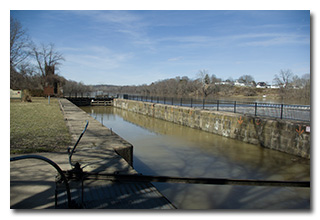 Finding himself disinclined to start his operation on 40m due to the high noise level on that band, Eric began his operation by finding a frequency to run on 30m, spotting himself on POTA Spots, and calling "CQ POTA". Eric's first QSO came at 1608 UTC with NP3K in Florida. QSOs came steadily on 30m, with Eric's thirteenth QSO coming at 1622 UTC with K9VIC in Illinois. This run included QSOs with operators in Florida, New York (3), Wisconsin, Missouri, Illinois (2), Connecticut, Tennessee, New Jersey, Maine, and Quebec.

Switching to 20m, Eric found himself a frequency to run, began calling "CQ POTA", and was pleased to see that POTA Spots automatically updated his spot to reflect his 20m frequency. Eric's first QSO on 20m came at 1627 UTC with N4SAX in Florida. QSOs came slowly enough on 20m that Eric took several breaks to check POTA Spots for P2P QSO opportunities, but no P2P QSOs were made. Back on his 20m frequency, Eric's second 20m QSO came at 1639 UTC with VE1PVH in Nova Scotia. 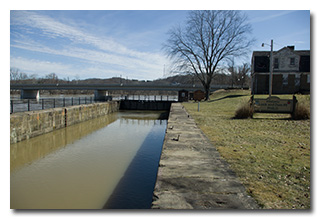 After fiddling with his KX3's noise blanker (NB) feature, Eric decided he could try to make some QSOs on 40m. Finding a frequency to run, he began calling "CQ POTA" and was again pleased to see that POTA Spots automatically updated his spot. Eric's first QSO on 40m came at 1643 UTC with K4DJG in Virginia. QSOs came quickly, with Eric's seventh QSO in this run coming at 1648 UTC with W1EDX in Connecticut. This run included a P2P QSO with W4TRA who was activating Mayo River State Park (K-2743) in North Carolina and QSOs with operators in Virginia (2), New York, Wisconsin, North Carolina (2), New Hampshire, and Connecticut. Because of the high noise floor, Eric gave out many signal reports of "559" and "539" but Eric was pleased to have been able to make QSOs on 40m despite the high noise level. 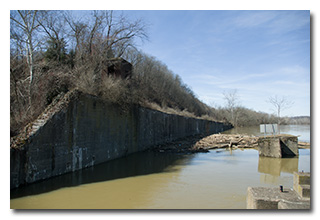 In all, Eric made twenty-five QSOs, including three P2P QSOs. All of Eric's QSOs were CW and were made with five watts output.

Signals strengths were lower than Eric would have expected, perhaps due to the ongoing CME-strike, but perhaps due to the speaker-wire W3EDP Jr. antenna. Eric was pleased enough with the performance of the speaker-wire W3EDP Jr. antenna to want to continue test it further at subsequent outings. The only significant problem Eric noticed with the antenna was a slight amount of RF on the metal bits of his CW paddle; there was just enough RF on the key to be noticable but not enough to be painful.