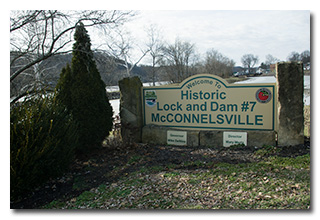 On Monday, February 21, 2022, one member of the Southeast Ohio Radio Adventure Team performed a successful activation of Muskingum River State Park in Ohio as part of the Parks on the Air (POTA; link) program.

Having decided that his goal within POTA for the next few months would be to earn the Oasis Repeat Offender Activator Award for Muskingum River State Park by visiting all ten of the river-navigation locks and dams that make up the state park, Eric McFadden, WD8RIF, visited McConnelsville Lock and Dam #7 on a beautifully sunny and unseasonably warm mid-February day, arriving at the lock at about 1915 UTC. Eric was accompanied by the little dogs Theo and Mindy.

This was to be Eric's seventh activation of Muskingum River State Park, with his previous activations having occurred at... 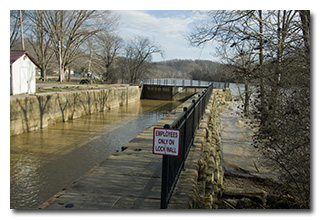 Finding a parking spot overlooking a Muskingum River still swollen from rains the better part of a week prior, Eric parked his car, walked the little dogs, set up his 28½' wire vertical on a Jackite 31' telescoping fiberglass mast and drive-on mount, and, because it was a bit windy, set up his KX3 inside the car. Eric was on the air at 1930 UTC.

As he had hoped, Eric found he had good cell-signal at McConnelsville Lock and Dam #7 and he was able to spot himself on POTA Spots (link) and to use POTA Spots to identify possible park-to-park (P2P) QSO opportunities.

Eric began his operation by consulting POTA Spots to identify possible P2P QSO opportunities and at 1933 UTC he made a P2P QSO on 20m with K5SJC who was activating Ray Roberts Lake State Park (K-3051) in Texas. 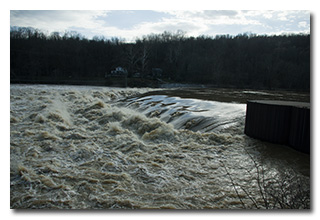 Upon turning to 40m, Eric found the band's noise-floor to be about S5 on his KX3's s-meter. Eric initially suspected that some local source was causing this noise but after consultation with others, determined that most of this noise-floor, along with rapid and deep fading, was from a coronal mass ejection that was striking the Earth at that time .

Finding a frequency to run on 40m, and without being sure he'd be able to actually work anyone because of the elevated noise-floor and fading, Eric began calling "CQ POTA" and was rewarded at 1936 UTC with a call from his good friend K8RAT in central Ohio. QSOs came steadily, if not exactly rapidly, on 40m, with Eric's thirtieth QSO on 40m coming at 2014 UTC with KD4O in South Carolina. This run on 40m included a P2P QSO with Eric's friend K4SWL who was activating the Blue Ridge National Parkway (K-3378) in western North Carolina and QSOs with operators in Ohio (4), Wisconsin (2), Virginia, North Carolina (3), New Hampshire, New York (3), Illinois, Florida, Ontario (2), South Carolina (3), Michigan (2), and Pennsylvania (2). Eric noticed that the signals he heard on 40m were much weaker than would have been usual, and that his signal was reported as being weaker than he would have expected, both very probably being indications of weakened propagation due to the coronal mass ejection. In addition to the weaker-than-normal signals, Eric was unable to complete some QSOs because fading was so deep and fast that he lost the other operator before he could manage to copy a complete callsign. 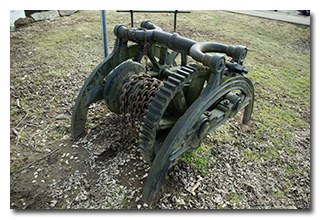 Switching to 20m, Eric found himself a frequency to run, spotted himself on POTA Spots, and began calling "CQ POTA". His first QSO in this run on 20m came at 2022 UTC with NK3H in Arizona. This was followed at 2023 UTC by a QSO with WV0Q in Colorado. Eric's final QSO came at 2027 UTC with W0JAZ in Utah. During this run, Eric discovered that POTA Spots kept spotting him as still being on 40m, even after he re-spotted himself as being on the 20m frequency. What was causing this and how could it be prevented from happening in the future? Eric doesn't know.

In all, Eric made thirty-four QSOs, including two P2P QSOs, in just under an hour. All of Eric's QSOs were CW and were made with five watts output. 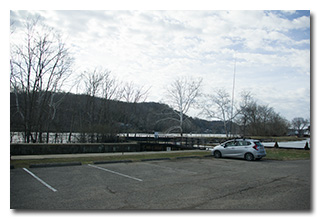