Most remote of all of the Muskingum River Parkway locks, Luke Chute is named out of spite for Luke Emerson, who built several mills on the river. The dam Emerson built for the mill here increased water power on the far side of the river, making it difficult for the rivermen to push their boats up the created rapids; in retaliation, they named the site “Luke Chute.” Downstream of Luke Chute the river is remote and enjoys heavy wooded cover. 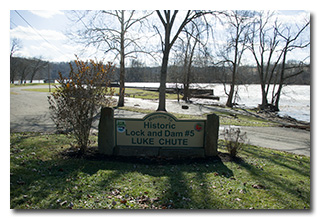 On Saturday, February 19, 2022, one member of the Southeast Ohio Radio Adventure Team performed a successful activation of Muskingum River State Park in Ohio as part of the Parks on the Air (POTA; link) program.

Having decided that his goal within POTA for the next few months would be to earn the Oasis Repeat Offender Activator Award for Muskingum River State Park by visiting all ten of the river-navigation locks and dams that make up the state park, Eric McFadden, WD8RIF, visited Luke Chute Lock and Dam #5 on a beautifully sunny but cold and very windy day, arriving at the lock at about 1900 UTC. Eric was accompanied by his wife Vickie and the little dogs Theo and Mindy.

This was to be Eric's sixth activation of Muskingum River State Park, with his previous activations having occurred at... 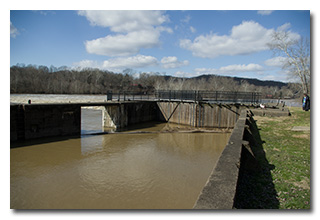 Eric had hoped to try out his newly-constructed speaker-wire W3EDP, Jr. antenna during this activation but upon arrival at Luke Chute Lock and Dam #5 he found the wind to be so biting he decided to go with his proven and quick-to-deploy 28½' wire vertical with three 17' counterpoise wires. Finding a parking spot overlooking a very rain-swollen Muskingum River, Eric parked his car and, while the little dogs explored, set up his 28½' wire vertical on a Jackite 31' telescoping fiberglass mast and drive-on mount and set up his KX3 inside the car. Eric was on the air at 1916 UTC.

As he had hoped, Eric found he had good cell-signal at Luke Chute Lock and Dam #5 and he was able to spot himself on POTA Spots (link) and to use POTA Spots to identify possible park-to-park (P2P) QSO opportunities. However, while Eric was making his first spot on POTA Spots, the wind was so gusty it caused his Jackite mast to collapse and Eric had to exit the car to extend the mast again, taking care to fully pull out each section, and hoping the mast wouldn't collapse during a string of QSOs. 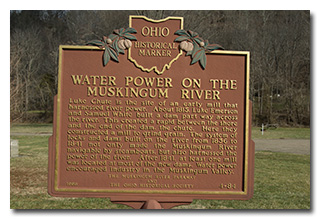 Switching to 20m at 1647 UTC, and this time having to go way up in the band to avoid the ARRL DX Contest, Eric found himself a frequency to run and began calling "CQ POTA". His first QSO on 20m came at 1935 UTC with NJ0Q in Minnesota, a station Eric had also worked earlier on 40m. QSOs came steadily, with Eric's sixth QSO on 20m coming at 1939 UTC with W4MEM in Tennessee. This run included a QSO with EC1R in Spain, a QSO with VE9DCD in New Brunswick, and QSOs with other operators in Minnesota, Texas, Kansas, and Tennessee. 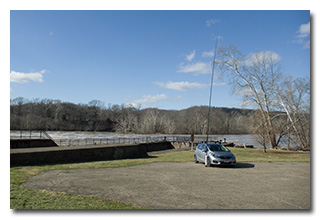 Finally, Eric checked POTA Spots for P2P QSO opportunities and at 1944 UTC he made a P2P QSO on 40m with WG8X who was activating Zepernick State Wildlife Area (K-9522) in northeastern Ohio.

In all, Eric made eighteen QSOs, including one P2P QSO, in twenty-eight minutes. All of Eric's QSOs were CW and were made with five watts output. 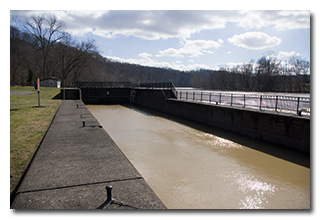 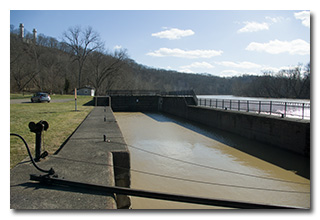 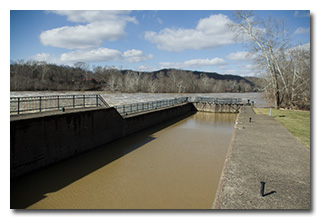 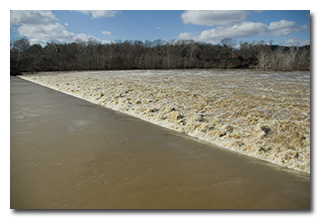 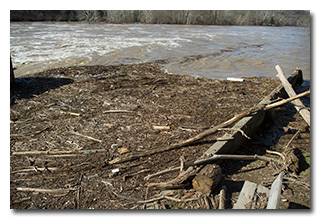 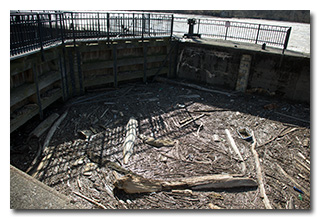