The Y Bridge crosses the river where the Licking River empties into the Muskingum just below the dam. Built between 1837 and 1841, this tandem lock (the only one in the system) has mitered wood gates. The original bypass canal, built in 1816, serves as the earliest civil engineering improvement on the river and was constructed as an attempt to circumvent the Falls at Zanesville. The long, narrow island adjacent to the lock is the location of the original lock tender’s house. A former towpath used for the canal is maintained as park land. 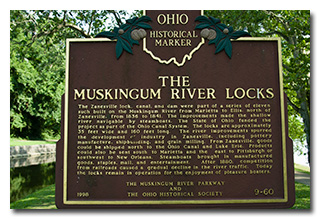 On Friday, July 23, 2021, one member of the Southeast Ohio Radio Adventure Team performed a successful activation of Muskingum River State Park in Ohio as part of the Parks on the Air (POTA; link) program.

Eric McFadden, WD8RIF, performed the activation at Zanesville Lock & Dam #10, the only double-lock on the Muskingum River, on a clear, hot July afternoon. After some initial trouble finding the access lane to the lock, Eric arrived at about 2000 UTC to find the gravel lot unoccupied except for a parked pick-up truck which Eric later realized probably belonged to the on-duty lock-keeper. Eric deployed his 28½' wire antenna on his 31' Jackite telescoping fiberglass mast and drive-on base and set up his KX3 inside the car. Eric was on the air at 2011 UTC. 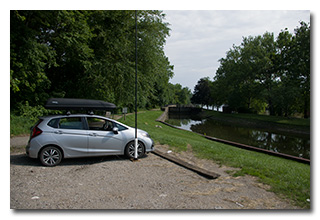 Given that Lock #10 is within the city of Zanesville, Eric was not surprised to find he had good cell signal and that he was able to spot himself to the POTA Spots website (link) and look for park-to-park (P2P) QSO opportunities.

Eric began operations on 40m and was pleased to find that the adjacent electrical substation wasn't generating significant noise on the band. Running a frequency on 40m, Eric had a very nice run of seventeen QSOs between 2011 UTC and 2035 UTC.

Pausing to check POTA Spots for P2P QSO opportunities, Eric made a P2P QSO at 2039 UTC on 20m with K5KUA who was activating Galveston Island State Park (K-3013) in Texas. Eric did note a higher noise floor on 20m and a attributed this to the adjacent substation.

I all, Eric made eighteen QSOs, including one P2P QSO, in thirty minutes. All of Eric's QSOs were CW and were made at the 5-watt level.

After his activation, Eric and his little dog Theo explored the lock. Eric learned from the lock-keeper and a another visitor that the historic lock-keeper's residence is falling down and can't be repaired. It is expected to collapse within two or three years. 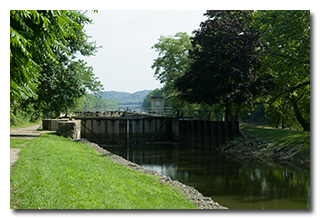 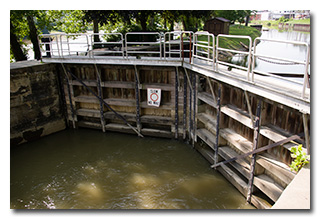 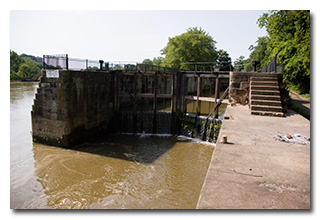 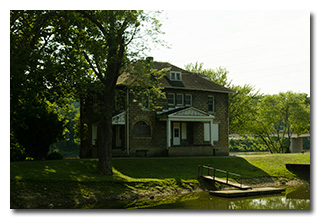 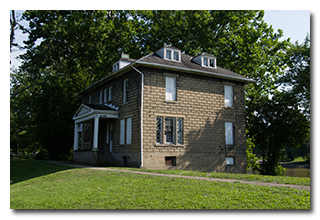