This was the second of six planned activations in Indiana and extreme southwestern Ohio over a three-day period, the first being the activation of Summit Lake State Park (link) earlier in the day. 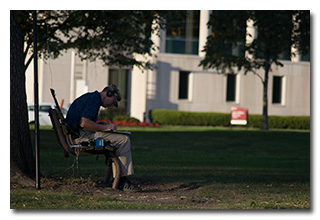 After checking in at the Sheraton Indianapolis City Centre Hotel—Eric was to participate in a conference at the adjacent Salesforce Tower (link) the following day—Eric and Miles walked about a mile from the hotel to Military Park within White River State Park while carrying Eric's Enhanced KX3 Travel Kit, a Jackite 31' telescoping fiberglass mast, and a 17' Goture Red Fox Super Hard 720 carbon-fiber mast. After surveying the various benches and trees within Military Park, Eric chose a bench that wasn't too close to traffic on the busy New York or West streets, was under a nice tree, and wasn't near any overhead wires. He and Miles deployed the 28½' wire vertical on the Jackite 31' telescoping fiberglass mast which was then leaned into the buckeye tree standing over the chosen bench. Setting up his KX3 on the bench, Eric was on the air at 2224 UTC.

Eric began operations on 20m by finding himself a clear frequency and beginning to call CQ. After only a few calls, Eric was pleased to see that he had been automatically spotted on POTA Spots. Eric's first QSO came at 2226 UTC with VE2JFM in Quebec. QSOs came quickly, with Eric's sixteenth QSO coming at 2242 UTC with KI1H in Florida. This run included QSOs with operators located in Quebec, Washington, Alabama, Indiana, North Carolina, Michigan, Texas (2), Virginia (2), Minnesota, Kansas, California, Louisiana, and Florida (2).

Finding a frequency to run on 40m, Eric began calling CQ and again was quickly auto-spotted on POTA Spots. Eric's first QSO in this run came at 2246 UTC with Eric's friend K8RAT in Ohio. As had been the case on 20m, QSOs came quickly, and Eric's nineteenth QSO on 40m coming at 2303 UTC with VA3IIF in Ontario. This run included QSOs with operators located in Ohio (5), New Jersey, Maryland (2), Illinois, Minnesota, Oklahoma, Pennsylvania, Puerto Rico, North Carolina, Tennessee (2), Virginia, South Carolina, and Ontario. With the evening light fading quickly, Eric decided to quit, tear down the station, and begin the sight-seeing walk back to the hotel.

In all, Eric logged thirty-five QSOs. All of Eric's QSOs were CW and were made with 5w output.

Eric snapped pictures on the roundabout walk back to the hotel: 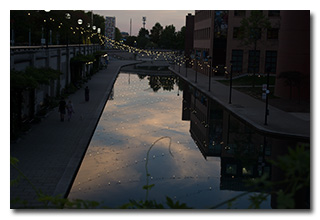 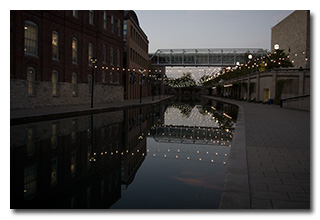 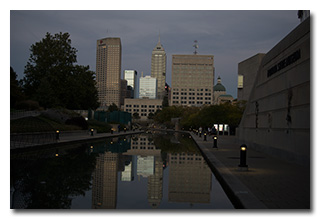 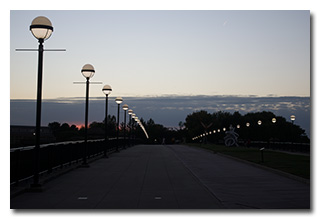 
This was the first truly urban POTA activation had performed. The experience of performing field-radio under a buckeye tree, with loud traffic and occasionally sirens on adjoining streets, and with people walking by on the nearby sidewalks, was a novel experience for Eric.