Indianapolis RATpedition! Park One of Six

An expansive view and good fishing beckon you to Summit Lake State Park, near New Castle. More than 2,680 acres, including a large lake, await your visit. Facilities include 120 electric campsites, three boat ramps, a beach bathhouse and two large open shelters that can be reserved for family picnics and other events.

Summit Lake has an excellent bird watching and wildlife observation area. The property has always been an important area for waterfowl because of the many low-lying wet meadows and prairies. Migratory species have included rare species like the black tern, bald eagle, sandhill crane, American bittern, least bittern, king rail and osprey. 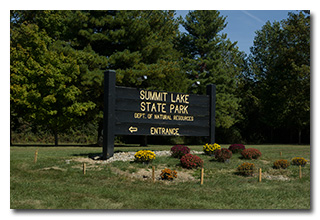 On Wednesday, October 5, 2022, two members of the Southeast Ohio Radio Adventure Team performed a successful activation of Summit Lake State Park (K-2270) as part of the Parks on the Air (POTA; link) program. While enroute to Indianapolis, Eric McFadden, WD8RIF, and Miles McFadden, KD8KNC, performed the activation of Summit Lake State Park at a picnic area near the swim-beach.

This was the first of six planned activations in Indiana and extreme southwestern Ohio over a three-day period.

Eric had planned to perform this activation at the park's boat-ramp parking area but upon arrival, he found there to be no shade against the brilliant sun. Backtracking the short distance to the swim-beach, he found picnic tables under the shade of trees and decided to perform his activation there. He and Miles deployed a 28½' wire vertical on a Jackite 31' telescoping fiberglass mast which was then leaned into the tree standing over the chosen picnic table. Setting up his KX3 on the picnic table, Eric was on the air at 1845 UTC.

Eric had good cell-signal at this location, so he was able to use POTA Spots (link) to identify possible Park-to-Park (P2P) QSOs and, if necessary, to spot himself. 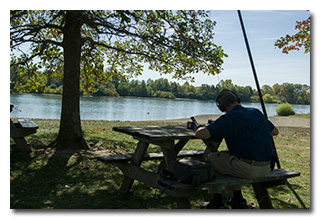 Eric began operations on 20m by finding himself a clear frequency and beginning to call CQ. After only a few calls, Eric was pleased to see that he had been automatically spotted on POTA Spots. Eric's first QSO came at 1847 UTC with K1PUG in Connecticut. This was followed at 1848 UTC by a QSO with F5PLR in France. Eric's third QSO came at 1850 UTC and was a P2P QSO with KA7GPP who was performing an activation of Blanchard State Forest (K-5566) in Washington. This was followed at 1851 UTC by a QSO with F4HMR in France. QSOs continued to come quickly, with Eric's eleventh QSO coming at 1859 UTC with W0GIB in Minnesota. This run included QSOs with operators located in France (2), Connecticut, Washington, Georgia, Kansas, Colorado, Pennsylvania, Louisiana, Florida, and Minnesota.

Finding a frequency to run on 40m, Eric began calling CQ and again was quickly auto-spotted on POTA Spots. Eric's first QSO in this run came at 1910 UTC with K8RAT in Ohio. QSOs came quickly, with Eric's eleventh QSO in this run coming at 1921 UTC with KF9R in Indiana. This run included a P2P QSO with KD8IE who was performing an activation of Auburn Marsh State Wildlife Area (K-9445) in Ohio and with operators located in Ohio (2), Wisconsin (2), Tennessee, Alabama, Illinois, Michigan, North Carolina, and Indiana (2). 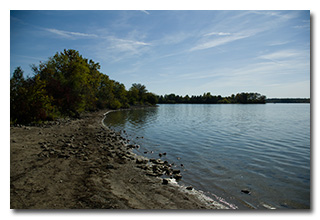 Eric finished his operation by again checking POTA Spots for P2P QSO opportunities and at 1925 UTC he completed a P2P QSO on 40m with VE3LJW who was performing a three-fer activation of Woolverton Conservation Area (VE-5572), Bruce Trail National Recreation Trail (VE-5628), and Niagara Escarpment Biosphere Reserve (VE-0063). Eric's final QSO came at 1928 UTC and was a P2P QSO on 30m with KD4O who was performing an activation of Peachtree Rock Wildlife Management Area (K-9223) in South Carolina.

In all, Eric logged twenty-eight QSOs, including eight P2P QSOs. All of Eric's QSOs were CW and were made with 5w output.