Twisting park and forest roads pass through deep ravines and dense woodlands. Scattered shortleaf and pitch pines growing on the ridges were once a source of pine tar for early settlers, hence the name Tar Hollow. Dogwoods, redbuds and a variety of wildflowers color the hillsides in the springtime. Fall's pageant of color is spectacular. 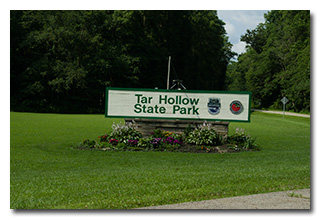 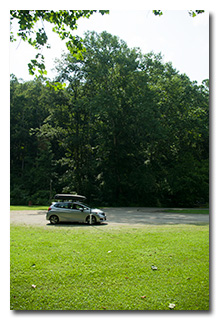 After a very short drive from the Tar Hollow State Forest firetower down the twisty gravel Forestry Service roads, Eric arrived at Tar Hollow State Park at about 1915 UTC. He was not at all surprised to find that he had no cell-signal whatsoever, or that the picnic shelter he had hoped to use for the activation was already being used by a large group. In fact, the entire state park seemed to be bustling with activity. Eric drove around for a very short time, hoping to find a spot with cell-signal, but none was to be found. In the end, Eric chose to set up his station on one edge of the little amphitheater's parking area. Eric quickly deployed his 28½' wire vertical on his Jackite 31' telescoping fiberglass mast and drive-on mount. Because of the intense sunshine and his aggressive schedule, Eric set up his KX3 inside his car. Eric was on the air at 1930 UTC.

The complete lack of cell-signal at this location meant Eric could not use the POTA Spots website (link) to spot himself or to look for possible park-to-park (P2P) QSOs. However, Eric had anticipated having no cell-signal at this park and had earlier texted his good friend K8RAT that he was enroute to Tar Hollow State Park, asking him to watch the Reverse Beacon Network (RBN, link) and to place a spot on POTA Spots he appeared on the RBN.

Eric began operations by selecting a 40m frequency to run but QSOs came slowly, with Eric's first QSO, a short rag-chew with an operator who wasn't a POTA hunter, coming at 1937 UTC. Eric's second QSO came at 1942 UTC, with K5TF, who assured Eric that he had been spotted to POTA Spots. At this point, QSOs came more quickly, with Eric finishing at 2005 UTC with ten QSOs logged. This run included a P2P QSO with ND9M who was activating Greenbrier State Park (K-1575) in Maryland.

Eric would have liked more QSOs but his aggressive itinerary didn't allow for much time at any of the parks, so Eric tore down his station in order to proceed to his next location.

In all, Eric made ten QSOs, including one P2P QSO. All of Eric's QSOs were CW and were made at the 5-watt level.