Twisting park and forest roads pass through 604 acres of deep ravines and dense woodlands. Scattered shortleaf and pitch pines growing on the ridges were once a source of pine tar for early settlers, hence the name Tar Hollow. Dogwoods, redbuds and a variety of wildflowers color the hillsides in the springtime. Fall's pageant of color is spectacular. 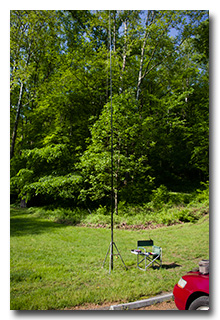 Arriving at the park about 1308 UTC, Eric chose as his operating location the picnic area near the road leading to the State Foreest fire tower. Eric quickly deployed his 28½' wire vertical on his MFJ-1910 33' telescoping fiberglass mast and set up his KX3 on his folding camp-chair at the base of the mast. Eric was on the air by 1324 UTC.

Eric began calling "CQ POTA" on 40m and was quickly rewarded with a response from NA3AR at 1326 UTC. By 1344 UTC Eric had made five QSOs on 40m and switched to 20m, where ten minutes of calling "CQ POTA" went unrewarded. Switching to 30m at 1400 UTC, Eric's first QSO there was with KE9AJ at 1406 UTC, with his fourth QSO on 30m coming at 1413 UTC. Returning to 40m to tune around instead of calling "CQ", Eric's tenth QSO was a a nice ragchew with K2KRG who was operating CW-mobile near Erie, Pennsylvania. (Steve was running a TS-480 at 125 watts into a scerewdriver antenna.)

How did K4SWL do at the fire tower in Tar Hollow State Forest? Apparently, conditions were not good for QRP SSB, and Tom managed only two QSOs with his KX2 before being forced to call it quits by time constraints.

Miles did not operate but he did help with navigation to the fire tower and with set-up and tear-down of Tom's station.