On Saturday, December 3, 2022, one member of the Southeast Ohio Radio Adventure Team performed a successful activation of Strouds Run State Park (K-1994) as part of the Parks on the Air (POTA; link) program.

On an unseasonably warm and blustery early-December day which started rainy but cleared up by late morning, Eric McFadden, WD8RIF, visited Dow Lake Dam within Strouds Run State Park for a quick POTA activation of the park. Eric was accompanied by his small dog, Theo. 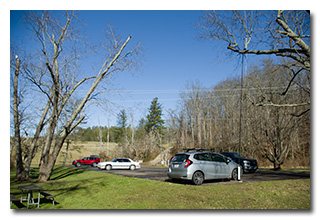 Eric arrived at Dow Lake Dam at about 1620 UTC, parked his car at one end of the small parking lot, walked Theo so the little dog could claim the park as his own, and deployed his 28½' wire vertical on his 31' Jackite fiberglass telescoping mast on his drive-on base. Because of the wind and the lingering threat of rain, Eric deployed his Elecraft KX3 inside his car and was on the air at 1636 UTC.

Eric began his operation on 20m by finding himself a frequency to run and calling CQ, and was pleased to be quickly auto-spotted on POTA Spots. Eric's first QSO came at 1641 UTC with KA0OBI in Minnesota. QSOs thereafter came very quickly on 20m, with Eric's fourteenth QSO coming at 1654 UTC with WB4IT in Alabama. This run included a P2P QSO with W1BLU who was activating Allapattah Flats State Conservation Area (K-8717) in Florida and QSOs with operators located in Minnesota (2), Texas, Arkansas, Missouri, Wisconsin, Idaho (2), New York, Arizona, Mississippi, Florida, and Alabama.

Switching to 40m, found himself a frequency to run, began calling CQ, and was again pleased to be quickly auto-spotted on POTA Spots. Eric's first QSO in this run came at 1658 UTC with his good friend K4SWL in western North Carolina. This QSO was immediately followed by a QSO with his good friend K8RAT in central Ohio. QSOs on 40m came very quickly, with Eric's fifteenth QSO on the band coming at 1711 UTC with KB9UWR in Indiana. This run included QSOs with operators located in North Carolina, Ohio (2), Tennessee, Illinois (2), Wisconsin (2), South Carolina, Virginia, Missouri, Michigan, Connecticut, and Indiana (2).

In all, Eric made thirty-one QSOs, including three P2P QSOs, in just about fifty minutes of operating time. All of Eric's QSOs were CW and were made at five watts output.

Following station tear-down, Eric and Theo climbed the trail to the of the dam to view Dow Lake. 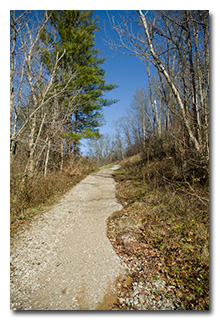 The trail to the top of the dam. 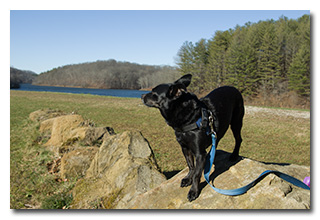 Theo-dog, master of all he surveys! 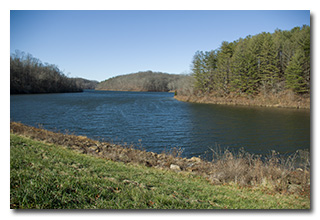