On Thursday, November 10, 2022, one member of the Southeast Ohio Radio Adventure Team performed a successful activation of Strouds Run State Park (K-1994) as part of the Parks on the Air (POTA; link) program.

On a beautiful, sunny, 70° afternoon, Eric McFadden, WD8RIF, took a half-day of vacation and visited Bulldog Shelter within Strouds Run State Park. Eric was accompanied by his wife, Vickie, and the two small dogs, Theo and Ginny.

Eric arrived at the Bulldog Shelter at about 1950 UTC and was pleased to find that the picnic shelter was unoccupied. 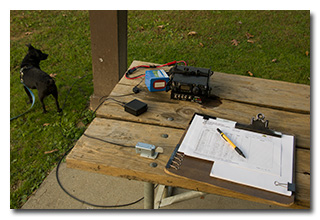 For this activation, Eric continued to test his recently-acquired Yaesu FT-817ND and his homemade VK3IL-inspired 40m end-fed halfwave (EFHW) antenna (link). Eric deployed his 31' Jackite telescoping fiberglass mast on his drive-on base and used the mast to support the far end of his EFHW, sloping the wire down to one of the picnic shelter's corner-posts; there, he secured the matching unit in place using a Prusik Knot (info on QRPer.com) and ran his 20' RG-58 feedline to his FT-817ND which had been set up on a conveniently-located picnic table. Along with his FT-817ND and 40m EFHW antenna, Eric used his HamGadgets Ultra Pico Keyer (link), his American Morse Equipment Mini-B single-lever paddle (link), and his Bioenno 4.5Ah LiFePO4 battery. Eric's LDG Z11 automatic antenna tuner was in-line but was set to "bypass". Eric was on the air at about 2002 UTC. 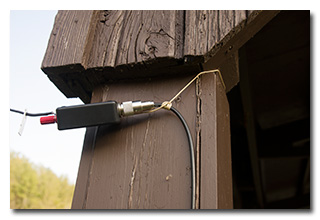 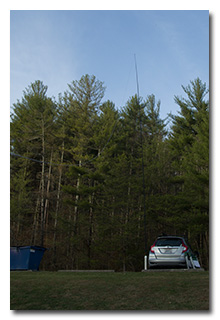 Eric began his operation by verifying a good SWR-match on 20m, finding himself a frequency to run, and calling CQ, and was pleased to be quickly auto-spotted on POTA Spots. Eric's first QSO came at 2006 UTC with KC2EE in Texas. QSOs came quickly, with Eric's thirteenth QSO coming at 2021 UTC with K7ZYV in Mississippi. This run included QSOs with stations located in Texas (2), Oklahoma, Florida (2), Ontario, North Carolina, Ohio, Wisconsin, Missouri, Louisiana, Georgia, and Mississippi.

Switching to 40m, Eric verified a good SWR-match, found himself a frequency to run, began calling CQ, and was again pleased to be quickly auto-spotted on POTA Spots. Eric's first QSO in this run came at 2023 UTC with his good friend K8RAT in Ohio. QSOs came quickly, with Eric's fifth QSO on 40m coming at 2028 UTC with AD8EV in Ohio. This run included QSOs with stations located in Ohio (2), Virginia, Wisconsin, and Illinois. 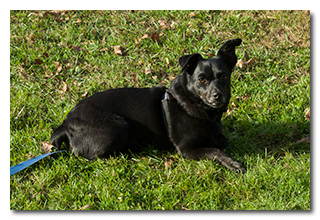 In all, Eric made twenty-three QSOs, including five P2P QSOs, in just about an forty-three minutes of operating time. All of Eric's QSOs were CW and were made at five watts output.