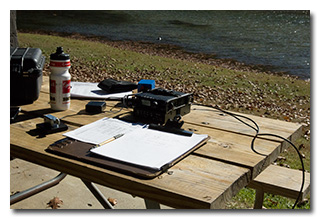 On Saturday, October 29, 2022, one member of the Southeast Ohio Radio Adventure Team performed a successful activation of Strouds Run State Park (K-1994) as part of the Parks on the Air (POTA; link) program.

Eric McFadden, WD8RIF, visited Bulldog Shelter within Strouds Run State Park on a beautiful Fall day with lovely blue skies and a temperature in the high 60s. The weather being so nice, Eric had planned to bicycle from his home to Bulldog Shelter and perform a bicycle-portable activation, but his wife had convinced him he shouldn't bicycle on public roads on a day on which Athens had been invaded by drunken college students for the annual Halloween Block Party in uptown Athens. (This evening was to be the first Halloween Block Party since COVID hit; the crowd promised to be even bigger than usual.) So, instead of biking to his activation, Eric carried his bicycle on his car to the Hockhocking-Adena Bikeway, did a nice thirteen mile out-and-back bike ride, and then drove to Bulldog Shelter for the activation. 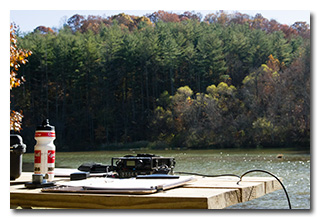 Eric arrived at the Bulldog Shelter within Strouds Run State Park at about 1815 UTC and, having forgotten to throw his folding camp-chairs in the car, was happy to find that the picnic shelter was unoccupied.

For this activation, Eric wanted to continue testing his recently-acquired Yaesu FT-817ND and he wanted to to use for the first time his homemade VK3IL-inspired end-fed halfwave (EFHW) 40m antenna (link) which he hoped would work well on 40, 20, 15, and 10m. After surveying antenna-deployment options, Eric deployed his 31' Jackite telescoping fiberglass mast on his drive-on base and used the mast to support the far end of his EFHW, sloping the wire down to one of the picnic shelter's corner-posts; there, he bungied the matching unit in place and ran his RG-8x feedline to his FT-817ND which had been set up on a picnic table in the adjacent corner of the shelter. Along with his FT-817ND and EFHW antenna, Eric used his recently-built HamGadgets Ultra Pico Keyer (link), his American Morse Equipment Mini-B single-lever paddle (link), and his Bioenno 4.5Ah LiFePO4 battery. Eric's LDG Z11 automatic antenna tuner was in-line but was set to "bypass". Eric was on the air at about 1829 UTC. 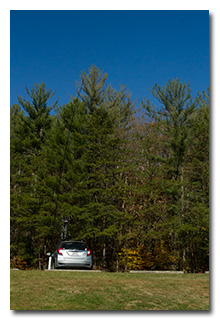 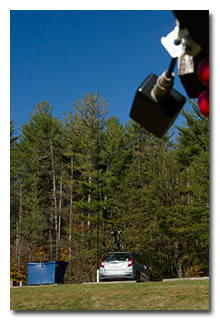 The near end of the EFHW tied off
on the picnic-shelter post; the
antenna wire can barely be seen
extending up to the top of the mast.

Eric began his operation by checking the 40m EFHW's SWR on 40m and 20m and quickly discovered he didn't yet know how to read SWR with the new-to-him FT-817ND. He did know how to change the FT-817ND's meter to display SWR but when he transmitted, the display just displayed "SW", with no number or bar-graph, so clearly there was a step he was missing. Not wanting to take time at that particular moment to study the radio's user-manual, Eric chose to use the LDG Z11 ATU in bypass-mode to measure the SWR, and on both 20m and 40m, the Z11's illuminated green and yellow LEDs indicated an SWR of "between 1.5:1 and 2:1", which was good enough to keep both the FT-817ND and Eric happy. (UPDATE: It turns out a display of just "SW" means the SWR is low. At increasing levels of SWR, the FT-817ND will display "SW" plus a bar-graph.)

Finding himself a frequency to run on 20m, Eric began calling CQ and pleased to be quickly auto-spotted on POTA Spots. Eric's first QSO came at 1830 UTC with KJ7DT in Idaho. QSOs came quickly, with Eric's twenty-third QSO coming at 1853 UTC with KQ9L in Illinois. QSOs came so quickly that Eric had needed only eight minutes to validate his activation by making the required ten QSOs. This run included a QSO with F4HZR in France, a QSO with WP4F in Puerto Rico, and QSOs with operators located in Idaho, Michigan, Georgia (2), New York (2), Ontario, Alabama, North Carolina, Louisiana, Illinois (4), Kansas, Massachusetts, Florida (2), Texas, Maine, and Montana.

Eric's final QSO came after he had quit and was taking photos. At 1916 UTC, he heard a station start calling "CQ POTA" on the 20m frequency the transceiver was sitting on, and Eric quickly completed a P2P QSO with N2DGQ who was activating Sparta Mountain Wildlife Management Area (K-8051) in New Jersey.

In all, Eric made thirty-one QSOs, including five P2P QSOs, in just about an forty-seven minutes of operating time. All of Eric's QSOs were CW and were made at five watts output.

Eric was pleased to find that his homemade 40m EFHW antenna worked well on 40m and 20m. He was also pleased his new Ultra Pico Keyer and his AME Mini-B paddle worked well together. 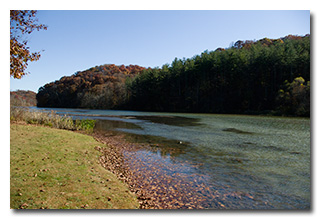 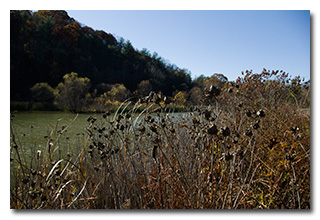