Several mounds and ancient fortifications were found in this area by early settlers telling us that the Adena Indians once lived here. In more recent history, this was home to the powerful Shawnee Nation until the Treaty of Greenville forced them to abandon their lands in southern Ohio.

The first settlers arrived in the Athens County region in 1796. Two townships of land in the area had been apportioned by the Ohio Company in 1795 for the benefit of a university. Settlers were encouraged to settle on these college lands so as to make them attractive, productive and to form a fund for the institution.

This venture led to the founding of the town of Athens and Ohio University, the first college in the Northwest Territory. Settlers came by way of flatboats from Marietta down the Ohio and up the Hocking River to an attractive bluff where the town of Athens is now located.

With the discovery of rich coal fields in the area, Athens County soon developed into one of the leading coal producers in the state. The Hocking Canal and railroads provided easy means for shipping coal to distant markets. Clay tile, brick and salt were other industries that brought prosperity to the area.

The park derives its name from the Strouds family who settled in the area in the early 1800s. The land was purchased by the state for forest conservation purposes from 1948 to 1953. The dam creating Dow Lake was completed in 1960. The lake bears the name of C.L. Dow of Ohio University who was instrumental in initiating the project. 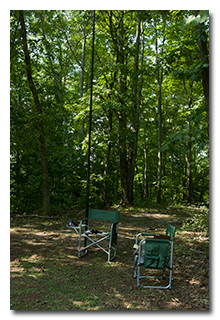 Eric and Theo arrived at the Horseman's Area about 1545 UTC, finding it to empty except for one unoccupied car. Eric decided to set up his station in the shade provided by an oak and a hickory tree, deploying his 28½' wire vertical on his Jackite 31' telescoping fiberglass mast which he strapped to his folding camp-chair. Setting up his KX3 on the camp-chair's folding table, Eric was on the air at 1553 UTC.

Eric had good cell-signal at this location, so he would be able to spot himself on POTA Spots (link) and to use POTA Spots to identify possible Park-to-Park (P2P) QSOs. 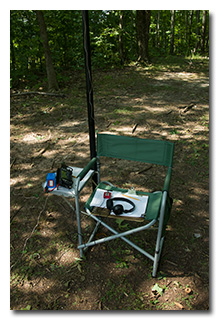 Eric tuned around the 40m QRP calling frequency of 7.030 MHz for QRP Afield participants but heard none. Selecting a frequency to run near the 40m QRP calling frequency, Eric spotted himself to POTA Spots and began calling "CQ AF" in hopes of making some QRP Afield QSOs. His first QSO in this run came at 1605 UTC with WA4RCW in Tennessee. QSOs came quickly, with the eleventh QSO in this run coming at 1618 UTC with K9ABR in Illinois. This run included a P2P QSO with W8GSR who was activating Mary Jane Thurston State Park (K-1975) in Ohio, a QSO with N1RBD who was performing a QRP (5w) Summits on the Air (SOTA) activation of a summit in Georgia, QSOs with Eric's buddies K8RAT in central Ohio and K4SWL in western North Carolina, and QSOs with operators located in Tennessee, Wisconsin (2), Indiana (2), Georgia, Ohio (2), North Carolina (2), and Illinois.

After responses to his CQ calls stopped, Eric again checked POTA Spots for P2P QSO opportunities and at 1627 UTC he completed a P2P QSO on 40m with K2UPD who was activating Cayuga Lake Wildlife Management Area (K-8103) in New York.

Eric tuned around the 20m QRP calling frequency of 14.060 MHz and found no QRP Afield participants. Choosing a frequency to run near the QRP calling frequency, Eric updated his spot on POTA Spots and began calling "CQ AF", again hoping to make QRP Afield QSOs. Eric's first QSO in this run came at 1629 UTC and was a P2P QSO with N4CD who was activating Spring Creek Forest State Preserve (K-4423) in Texas, a park N4CD had previously activated 245 times. At 1630 UTC, Eric completed his second and final QSO on 20m, with K5FNQ in Louisiana.

In all, Eric made nineteen QSOs, including eight P2P QSOs. All of Eric's QSOs were CW and were made with 5w output.

Even though Eric sent the full QRP Afield exchange (RST OH 5w), only one other station (the SOTA station N1RBD) sent his output power without being asked, and no station sent a New England QRP Club membership number—an indication that, at most, only one station Eric worked had been participating in the QRP Afield event. However, QRP Afield rules allow all QSOs made to be submitted for score. With a QSO count of 19, an SPC multiplier of 12, and a PWR/Location multiplier of 10, Eric's calculated score was 2,280 points. 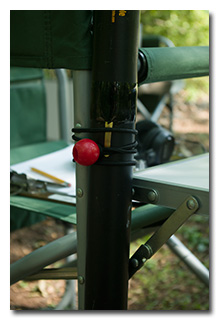 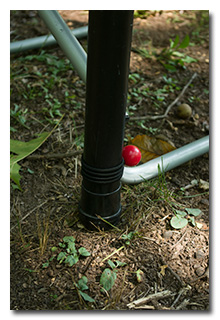 Detail: the 31' Jackite mast strapped to the folding camp-chair